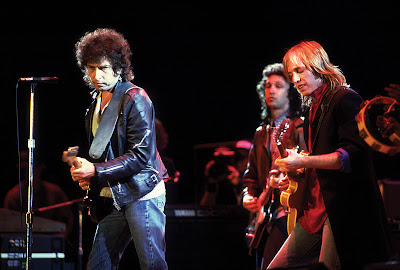 Farm Aid officially turns 25 this weekend, with this year's show held in Milwaukee. Founders Willie Nelson, John Mellencamp and Neil Young once again head up an all-star lineup helping to raise money for American farmers. I was there for that first show, held September 22, 1985 in Champaign, Illinois. With over 100 acts performing that day, it was easily the most diverse lineup I ever witnessed in concert.

The inspiration for Farm Aid came from remarks made by Bob Dylan at the successful Live Aid concert held earlier that summer. "I hope", Dylan said, that some of the money that's raised for the people in Africa, maybe they could just take a little bit of it, maybe … one or two million … to pay the mortgages on some of the farms." Willie Nelson felt that this was a fine idea. Soon, along with John Mellencamp, Nelson organized farmers to travel to Washington to testify before Congress about their struggles. In addition, with Neil Young, they began to put together a benefit concert intended to provide assistance to struggling American farmers. They named their benefit Farm Aid, and billed it as "A Concert For America".

They chose the University of Illinois' Memorial Stadium as the site for their show, and enlisted Chicago promoter Ron Stern to oversee the logistics. Arriving in Champaign, Stern quickly learned that the home of the Fighting Illini was ill-equipped to be a music venue: “There was only 100-amp [mains] service at the stadium; not nearly enough to power a whole stage show and a dressing room/backstage complex,” he recalls. Also, a way had to be devised for getting the myriad of acts on and off stage efficiently without delaying the show. Stern brought in $50,000 worth of generators and negotiated with the power company for additional electrical capacity. To keep the show moving, a manually-operated rotating stage was built. Divided in half, while one act performed for the audience, the next act set up their gear on the half behind the curtains.

The diverse roster of performers for Farm Aid I was a spectacular array of country, rock, and blues artists rarely matched on any stage before or since. Twenty-five years on, a lot of memories of that day are a bit fuzzy, but for sheer variety and quality, I've never experienced another day of music quite like it. The show began in a steady drizzle, but by afternoon the skies had cleared, and over 75,000 of us enjoyed a fine Midwestern autumn evening. Country kingpins like Alabama, Vince Gill and Kenny Rogers appeared on the bill with legends such as Johnny Cash, Merle Haggard, Loretta Lynn and George Jones. Acoustic performers like Joni Mitchell and John Denver were featured during the day; after dark rockers like Foreigner and Huey Lewis took the stage. John Fogerty came out with a woman dressed as a pig who danced on stage, symbolizing Fogerty's legal troubles with his ex-manager. Bon Jovi, barely known at the time, played one of their first shows in a stadium atmosphere. Lone Justice, another emerging act, played one of the night's sharpest sets. Bob Dylan appeared, backed by Tom Petty and The Heartbreakers. Their performance was so well-received that they soon agreed to launch a nationwide tour together. Sammy Hagar played live with Van Halen for the first time; Hagar launched into a raunchy monologue that got their set taken off The Nashville Network's live broadcast. Founders Young and Mellencamp turned in fine performances. Willie Nelson's set began the day's proceedings. He was a bundle of energy all day, bounding on and off the stage, introducing acts, generally keeping the party going. Nobody throws a party like Willie Nelson. Well past midnight, he launched into an hour-long set that I don't think was scheduled; I'm sure that he would have played till dawn if they had let him.

Farm Aid I raised over $9 million for struggling farmers, raised awareness of rural issues, and began a tradition that surprised Farm Aid's founders, who thought that they were putting together a one-time-only event. To this day, the Farm Aid organization has raised over $37 million and continues to advocate for family farmers throughout the USA. Celebrate 25 years of Farm Aid by checking out these classic performances from founders Willie Nelson, John Mellencamp, and Neil Young from that first show in Champaign. For more details, there's this excellent article about the challenges involved in staging that now-historic show.

Posted by dr sardonicus at 6:57 PM