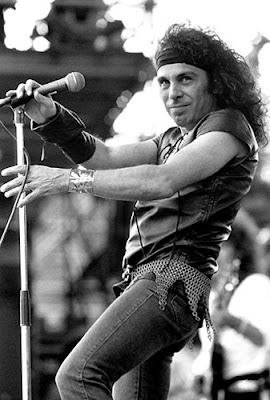 Hard rock vocalist Ronnie James Dio, best known for his stints in Rainbow and Black Sabbath as well as fronting his own band for many years, passed away Sunday after a long battle with stomach cancer. He was 67 years old.

He was born Ronald James Padavona in Portsmouth, New Hampshire on July 10, 1942; his family moved to Cortland, New York when he was a boy. While in his teens, he joined local group The Vegas Kings as their bass player, eventually becoming lead vocalist. He took his stage name from the Mafia figure Johnny Dio. During the 60's, Dio undertook a journey familiar to many other musicians of his era, moving from the rockabilly-oriented Vegas Kings and Ronnie And The Redcaps to the more "progressive" Ronnie Dio And The Prophets and Electric Elves. He honed a powerful vocal style that pushed his bandmates further into hard rock territory. By the early 70's, their name shortened to Elf, they earned a recording contract and a slot opening for Deep Purple. Purple guitarist Ritchie Blackmore took notice, and when he launched his solo career in 1975 selected Dio and other members of Elf to form Rainbow. Rainbow released four successful albums before Dio and Blackmore parted ways in 1979.

Dio next joined Black Sabbath on the suggestion of Sharon Arden, the daughter of that group's manager. (Sharon would go on to marry original Sabbath vocalist Ozzy Osborne and become something of a celebrity in her own right.) Upon Osborne's departure, many pegged Black Sabbath for a long descent into mediocrity, a relic of a bygone time. But Dio's presence would rejuvenate the veterans of sludge rock, spurring the group to record Heaven And Hell, their finest hour. Dio's vocals seemed to light a fire under guitarist Tony Iommi in particular, while his lyrics, laden with medieval imagery, worked well within Black Sabbath's musical context. Heaven And Hell returned Sabbath to the top of the heavy metal heap, and a series of triumphant live shows cemented the resurgence. Dio would greet the fans at the start of each concert by raising a fist high in the air with the first and fourth finger extended, a gesture he picked up from his grandmother. The corna, or sign of the horns, has many connotations in Italian folk culture, including the power to ward off the evil eye. Although probably not the first to flash the horns on stage, Dio would help popularize the sign into an internationally recognized symbol of rock and roll.

Black Sabbath's followup LP with Dio, Mob Rules, was a huge disappointment, returning the group to the murk of their pre-Heaven And Hell releases. The Sabs rebounded somewhat with a strong tour supporting the album, replacing drummer Bill Ward with veteran Vinny Appice. Dates from that tour were recorded for the Live Evil LP. Tensions flared between Dio, Iommi, and bassist Geezer Butler during the album's production, with Iommi and Butler accusing Dio of tampering with the mix behind their backs to highlight his vocals. Dio claimed that the other band members knew what he was doing, and that Iommi and Butler gave him permission to mix his vocals as he saw fit. Mutual dissatisfaction with Live Evil led Dio to part company with Black Sabbath in November 1982, taking Appice with him.

He would go on to form the band Dio, also featuring Appice and guitarist Vivian Campbell, releasing a credible debut Holy Diver in 1983. By now, Dio's style was well established, and his band would go on to release discs through the 80's and 90's, each successive release digging the creative rut a bit deeper. The group would enjoy a bit of an artistic comeback after 2000, as notable musicians such as Rudy Sarzo and Doug Aldrich would spend time in the lineup. Dio also reunited with his Black Sabbath bandmates from 2007-09, touring and recording under the name Heaven And Hell.

Although not immune to the bombastic excess that plagues the metal genre, Ronnie James Dio possessed one of rock's distinctive voices, and when at his best was capable of electrifying a recording studio or concert stage. The title track of Heaven And Hell became a signature performance, and this vintage clip from his Black Sabbath days captures him in fine form.

Posted by dr sardonicus at 5:06 AM