But it's so beautiful! 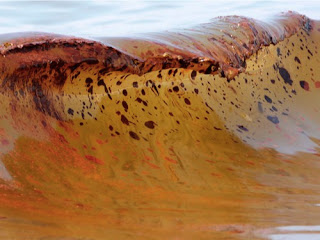 I think it is a tragedy of the first proportion that a private corporation can be subjected to what I would characterize as a shakedown, in this case a $20 billion shakedown, with the Attorney General of the United States, who is legitimately conducting a criminal investigation and has every right to do so to protect the interests of the American people, participating in what amounts to a $20 billion slush fund that's unprecedented in our nation's history, that's got not legal standing, and which sets I think a terrible precedent for the future."

Gosh Joe, you say you aren't speaking for the Rethugs!?

Say it ain't so Joe, because in your prepared remarks you echoed exactly the talking points prepared for you by the Republican Study Committee!

So make up your dammed minds rethugs; either the government isn't doing enough or it's doing too much.

It's sure easy for Barton (R-TX_BP) to say, his Gulf coast is up wind and tides and his biggest contributor is the oily industry.

"The oil spill in the Gulf is this nation's largest natural disaster and stopping the leak and cleaning up the region is our top priority. Congressman Barton's statements this morning were wrong," House GOP leaders John Boehner, Eric Cantor and Mike Pence said in a statement.