Why does the sun go on shining . .

There Will Be Blood

Former Senator Alan Simpson is a Very Serious Person. He must be — after all, President Obama appointed him as co-chairman of a special commission on deficit reduction.

So here’s what the very serious Mr. Simpson said on Friday: “I can’t wait for the blood bath in April. ... When debt limit time comes, they’re going to look around and say, ‘What in the hell do we do now? We’ve got guys who will not approve the debt limit extension unless we give ’em a piece of meat, real meat,’ ” meaning spending cuts. “And boy, the blood bath will be extraordinary,” he continued.

Think of Mr. Simpson’s blood lust as one more piece of evidence that our nation is in much worse shape, much closer to a political breakdown, than most people realize.

The fact is that one of our two great political parties has made it clear that it has no interest in making America governable, unless it’s doing the governing. And that party now controls one house of Congress, which means that the country will not, in fact, be governable without that party’s cooperation — cooperation that won’t be forthcoming.

It’s hard to see how this situation is resolved without a major crisis of some kind. Mr. Simpson may or may not get the blood bath he craves this April, but there will be blood sooner or later. And we can only hope that the nation that emerges from that blood bath is still one we recognize.

In the latest post-victory peroration by Republican honchos, Kentucky's Mitch McConnell, the Senate minority leader, outlined on Thursday morning his vision of the way forward for the GOP before a friendly audience at the conservative Heritage Foundation. To save you some time, here's the five-word synopsis: President Obama's agenda must die.

Loyal opposition? Not so much.
Posted by SteveAudio at 12:19 AM 7 comments:

As good as it gets

This blog post by Roger Ebert is one of the finest set of words I've ever come across. I can only excerpt a tiny bit, but please read the whole thing because he, (like us;-), includes lots of salient, beautiful music.

All the lonely people

Lonely people have a natural affinity for the internet. It's always there waiting, patient, flexible, suitable for every mood.
[...]
What do lonely people desire? Companionship. Love. Recognition. Entertainment. Camaraderie. Distraction.

Encouragement. Change. Feedback. Someone once said the fundamental reason we get married is because have a universal human need for a witness. All of these are possibilities. But what all lonely people share is a desire not to be -- or at least not to feel -- alone.

Seriously, read the whole thing, it's a short short story in a blog post. It's a beautiful comment on our human condition.

And the music is great too. He just forgot one song.

You Had The World At Your Fingertips, No One Can Make It Better Than You

Hey kids, get off my lawn! You too, you sanctimonious bastards who thought you were teaching Dems a lesson by not voting. Have you seen what you've done? Do you really think putting Rethuglicans in charge will help DADT, DOMA, climate change, single payer, SS, MediCare ... etc, etc, etc.

But why not, you know? After all, what have Obama & DemCo done for you lately, I mean aside from these 244 things.

The main failure for most folks was the dismal record of jobs creation, but did you know we went from LOSING jobs under Bush to (finally) gaining jobs under Obama? 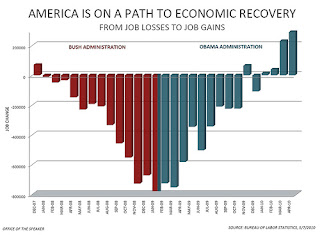 I've had a little hot-blooded commentary at Facebook lately, with some folks responding to a couple of posts wherein I criticized the right-wing movement in the US and those in the LGBT community who embrace Republicanism, against their own best interests.
It all started here:

LGBT friends: Please don't vote for Republicans. They want to marginalize & discriminate against you. Dem's haven't done enough but Rs? No.

Too bad that is what you think of Republicans. Sounds like you don't allow for independent thinking which even a Republican can do. P.S. This is not a "democracy" but a "republic." Look up the difference.

While she is a lovely & kind person, I suspect her knee-jerk reaction confused the issue. I said "Don't vote for Republicans", which clearly means professional Republican politicians, working in concert with the Republican Party. Clearly there can be "independent thinking" by folks of any political persuasion, but that wasn't my point.
Point was, the R party has done nothing I can think of since Eisenhower left office that would in any way help working people, minorities, the persecuted and downtrodden, or anyone else not in their power elite base.
That's all I meant. Increasing redistribution of wealth upward, decrease of civil rights, increase in national dept, decrease in American manufacturing base, decrease in real wages, massive loss of retirement income for many workers, increase in phony financial instruments designed to move even more money to the upper classes, disregard for safety and priority of active duty military, the list goes on.
That was my point. I stand by it.
Look, I know many on the religious right become seduced by social issues: abortion, gay rights, etc. But folks, wake up, you're being played! While certain right-wing politicians truly are anti-abortion, NO movement will ever be made to overturn Rowe v Wade. If they were serious, they would have done it during the many years Congress was overwhelmingly R. But it's too good a wedge issue to waste by overturning the law, it's better theater to rail against abortion as the great Satan.
So please folks, think about what actually has occurred during Republican administrations and Congresses, and then vote intelligently for what will really help you and America.
Posted by SteveAudio at 12:34 AM 7 comments:

Perfect music, performed perfectly
Rockers today: can you compete with this?
Here's a close approximation of the original version:
Posted by SteveAudio at 1:02 AM 7 comments: