As you stare into the vacuum of his eyes 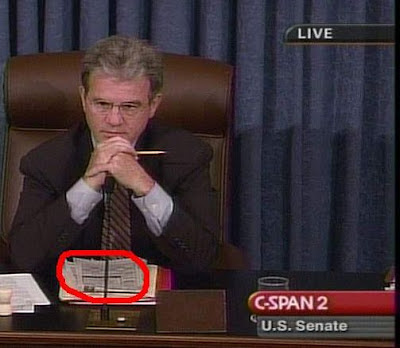 Sen. Tom Coburn is mulling an entry into the Republican presidential primary, according to sources inside and outside the Senate. Coburn, a senator from Oklahoma, is believed to be receiving encouragement from a small group of wealthy businessmen and philanthropists in the Oklahoma-Kansas-Texas region of the country.

. . . Coburn is believed to have the backing of several low-profile members of the so called "Swift Boaters," men who financed the ads that doomed the presidential aspirations of Sen. John Kerry.

I wonder of some of those supporters include Jerome Corsi, about whom I wrote the other day.

But on to Sen. Coburn (R-Crossword):

The case never went to trial, but court documents first reported this week by Salon.com show that Coburn withheld information about the sterilization in submitting a bill to Medicaid for a related procedure involving a troubled pregnancy because the Medicaid program does not cover the sterilization of anyone younger than 21.

The American Prospect, during Coburn's 2004 senatorial campaign, he quoted a local resident that in the town of Coalgate, Oklahoma, "Lesbianism is so rampant in some of the schools in Southeast Oklahoma that they'll only let one girl go to the bathroom. Now think about it."[10] School officials have denied his statement.[11] Coburn has also been quoted as saying:

Coburn protested NBC's plan to air the R-rated Academy Award-winning Holocaust drama Schindler's List during prime time. Coburn stated that, in airing the movie without editing it for television, TV had been taken "to an all-time low, with full-frontal nudity, violence and profanity." He also said the TV broadcast should outrage parents and decent-minded individuals everywhere. Coburn described the airing of Schindler's List on television as "...irresponsible sexual behavior...I cringe when I realize that there were children all across this nation watching this program."

That's right. Like John Ashcroft, he feels that titties are Teh Bad, and outweigh the importance of learning about, you know, genocide.

In October 2005, Coburn, a staunch fiscal conservative, made several attempts to combat pork barrel spending in the federal budget. The best-known of these was an amendment to the fiscal 2006 appropriations bill that funds transportation projects [3]. Coburn's amendment would have transferred funding from the infamous Bridge to Nowhere in Alaska to rebuild Louisiana's "Twin Spans" bridge, which was devastated by Hurricane Katrina. The amendment was defeated in the Senate, 82-14, after Ted Stevens, the senior senator from Alaska, threatened to resign his office if the amendment was passed.

Coburn became the first Republican on the Senate Judiciary Committee to call for the firing of Attorney General Alberto Gonzales as a result of the controversy concerning the dismissal of eight United States Attorneys.[4][5]

So that part is good, Coburn sees Gonzales as a problem. Of course, we're not sure of the nature of the problem. Is it because he has brought shame to the AG office, or because he's threatening the GWBush administration. Who knows?

Note: All cited footnotes are available at the Wikipedia post. And the image of Coburn from BartCop is from John Robert's Supreme Court confirmation hearing. 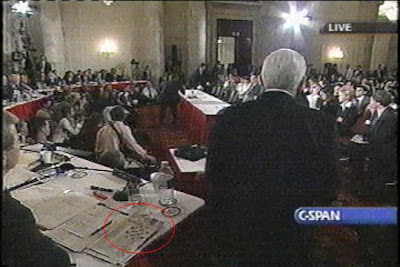