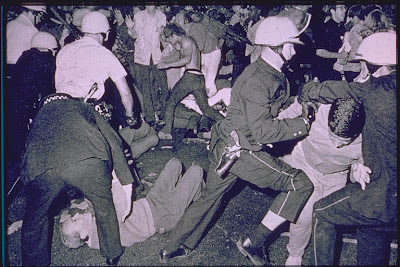 Are you kidding me? Is it the '68 Democratic Convention and Mike Wallace is getting roughed up on camera again?

Well, Eric Alterman got himself arrested, and no, not on camera:

Columnist and author Eric Alterman has been released after being arrested Sunday night inside the debate spin room. He was charged with criminal trespass after police say he refused repeated orders to leave.

Goffstown, N.H. police said Alterman was in the spin room as a guest of the Creative Coalition and went to an area reserved for a private reception for WMUR-TV. Police said he was asked by an executive at the party if he was invited to the private area and was asked to leave. A police officer was called after a verbal altercation ensued. According to police, Alterman was asked seven times to leave and became increasingly loud as he refused. After ignoring a final request, police said he was handcuffed and taken from the building.

Alterman spoke with CNN after being released. He called the arrest a “misunderstanding” and claimed he did not refuse orders to leave.

Right. Misunderstand this. Misunderstanding all you see. The whole thing reads like an episode of Andy Griffith. You know, the one where Barney Fife was smoking crack and...well, over-reacted. Or something.

It does get better. Apparently after the locals hauled the physically threatening and Hulk Hogan-like Dr. Alterman to the local hoosegow, things, well, somehow got more pacific. From the comments at the original post, by the fierce Dr. Alterman:

I came to New Hampshire with the Creative Coalition for a panel tomorrow morning and was supposed to be in the auditorium for the debate but because I am a journalist, they were told I would have to wait in the spin room. When I got to the spin room, which was an empty gymnasium, I noticed that there were chairs located on a balcony above us. So I went up there–no one asked me for my ID or anything–and went over to the bar and asked if it was a cash bar, because I had no idea what kind of event it was. I was told it was an open bar so I asked for a glass of wine and a glass of water and went to sit down and wait for the event to begin.

A guy came over and asked me who I was and I told him I was a colmunist for The Nation and he told me I had to leave. I thought he was kind of rude, so I asked him his name, thinking it might go into Altercation the next day. He refused to answer me I asked again. He refused again. But I was following him out when he went to get a cop. The cop told me to leave the room and I did. We left the room, past where the people were handing out badges to go into the reception and I figured the entire drama was over. But the cop kept yelling at me to leave. I didn’t understand. I thought I had left. I asked him to stop yelling, I had left. He kept telling me to leave. In retrospect, I guess he was kicking me out of the building and I didn’t understand, but it was really mystifying and annoying and I told him I wanted to speak to his commanding officer.

We went over to the commanding officer and I, calmly and politely, sought to explain that I didn’t know why this cop was continuing to hassle me. The first cop kept interrupting me as I tried to explain myself and finally I turned around and said, “Can I please finish a sentence here?” That’s when the first cop decided to arrest me. He handcuffed me behind my back and took me outside.

Read the rest. Pretty silly, and yet incredibly demeaning, I'm sure. Oh, and yo, E, now you got some street cred.

Update: from Wayne Madsen, in comments at HuffPo:

"April 25, 2007 -- There was once a time in Congress when the US Capitol Police withheld their political views. However, since Terrance Gainer took over as Chief with the backing of people like Tom DeLay, that has all changed. Gainer is now the Senate (the Democratic Senate) Sergeant-at-Arms. However, his legacy of politicizing the US Capitol Police lives on.

When this editor arrived at the House Cannon Office Building yesterday to cover Dennis Kucinich's noon news conference on his bills of impeachment of Dick Cheney, I asked one of the Capitol Police where the Second Floor Terrace was located. The police officer asked what was going on there and I mentioned Kucinich's bills of impeachment against Cheney. He shook his head and rolled his eyes and uttered, "When are they going to stop." I answered, "When Cheney and Bush are gone." For him, that clearly was not the right answer..." http://waynemadsenreport.com/2007_04130506.php