And there ain't nothing I can do about it 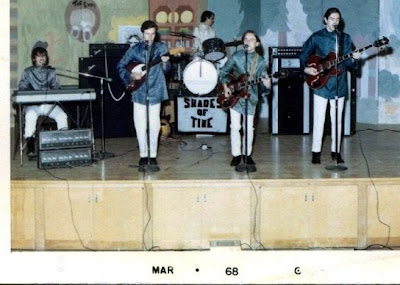 Long ago, in a galaxy far far away, the kid with the mustache playing keyboard above was me.
Today, I spent the afternoon with the lead singer (green jacket, red guitar: Dave Kellstrand) and the drummer (Hal Davis). The last time the 3 of us were all together was probably in '69, so I'd say the visit was long overdue. We were all great friends, but we just drifted due to family moves and the vagaries of normal life. But we had a fine time today, comparing memories and thoughts about our misspent youth. And music. Because at the end of the day, it's all about the music.
Interestingly, we know where the tall bass player (Jon Rooff) is, and we think we've located the guy playing the purple teardrop-shaped guitar (Mathew 'Mike' Peters).
We were what was called a cover band, but we were fairly unconventional. We played not just the current radio hits, but some fairly ambitious not-so-popular rock too. For example, we played 5 songs off the 1st Buffalo Springfield album, not just the radio singles. But we also did a couple of Vanilla Fudge tunes, songs I never heard another band attempt to cover.
Were we any good? I think so, audiences seemed to like us, and we played a lot during '67-'68. We even did our own Fudge-esque versions of a couple of songs. Toward the end of our existence, we even did one original song that I wrote call "Don't Turn Out The Light", that Dave & Mike sang and did the vocal arrangement on. We felt we were future stars.
A recording of us at the gig pictured did exist, but we have no idea if it's around anywhere.
Obviously I have no real idea what song this photo shows, but since I'm playing keys pretty intently, and not guitar, I have a feeling it might be our version of this:
Posted by SteveAudio at 12:25 AM