We will, we will rock you 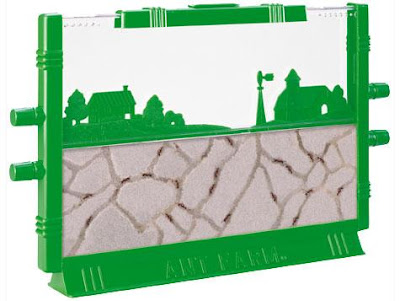 Imagine you had an Ant Farm, lots of kids had them. Now, imagine that you, as the only source of food, stopped feeding them.

And now imagine that the ants are actually people, trapped behind walls you control, with little or no food or resources. And finally, imagine that you are one of the people trapped in the Ant Farm. I'm pretty sure you'd be really pissed. Mad enough to fire some rockets at your captors? Probably:

Israel, backed by the United States, Europe, Egypt and the Palestinian Authority, has sought to isolate Hamas by squeezing Gaza economically, a policy that human rights groups condemn as collective punishment. Israel and Egypt, which control routes into and out of Gaza, have blocked nearly all but humanitarian aid from going in.

The result has been the near death of the Gazan economy. While enough food has gone in to avoid starvation, the level of suffering by ordinary people is very high and getting worse each week, especially in recent weeks as Israel closed the routes entirely for around 10 days in reaction to daily rocket fire.

Opening the routes to commerce was Hamas’s main goal in its cease-fire with Israel, just as ending the rocket fire was Israel’s central aim. But while rocket fire did go down drastically in the fall to around 15 to 20 per month from hundreds per month, Israel said it would not permit trade to go back up until the rockets actually stopped, and because Hamas continued to smuggle weapons through desert tunnels from Egypt. Hamas said this was a violation of the agreement, a sign of Israel’s real intention and cause for further rocket fire.

Hamas is some bad guys, and the whole "destruction of Israel" thingie isn't really a good idea, as if it would ever happen. But Israel has been no less truculent, nearly starving the Palestinians, and destroying the economy with their foolish and provocative blockade, crippling West Bank commerce.

GWBush promised a peace agreement, and as expected, that promis has as much validity as his promise of "humble foreign policy. For more analysis, read Jon Perr's post at Crooks & Liars today:

In January, George W. Bush famously predicted he would broker a Middle East peace by the end of his presidency. Now with Israel's launch this morning of airstrikes in Gaza -- which so far have left 155 dead -- Bush's pledge of a two-state solution is just the latest failure of his disastrous tenure in the White House.

Tensions between Israeli and Hamas forces have been escalating since the expiration last week of a six-month truce negotiated by Egypt. The retaliatory tit-for-tat has included Israeli strikes against militants in Gaza, and Hamas firing rockets and mortars into Israel. And while Israel reopened border crossings Friday for deliveries of food, supplies and humanitarian aid, the AP reported that the government of Prime Minister Ehud Olmert "wrapped up preparations for a broad offensive."

On Thursday, the scandal-plagued outgoing Prime Minister issued a warning to Palestinians in Gaza. As Reuters recounted:

"I didn't come here to declare war," Mr. Olmert told Al Arabiya, an Arab broadcaster widely watched in Gaza. "But Hamas must be stopped - that is the way it is going to be."

He issued what amounted to a public call to Gazans to overthrow Hamas, the Islamic group that controls the territory. "I'm telling them now," he said. "It may be the last minute. There will be more blood there. Who wants it? We don't want it."

At least Hamas is doing humanitarian work for its people, as both a real and political counter to Israel's aggression and domination. Still, some real diplomacy by the outgoing Bush Admonistration would have been a good thing.

Oh wait, what was I thinking.

Bastards.
Posted by SteveAudio at 11:03 AM