Well can't you just let it ring a little longer 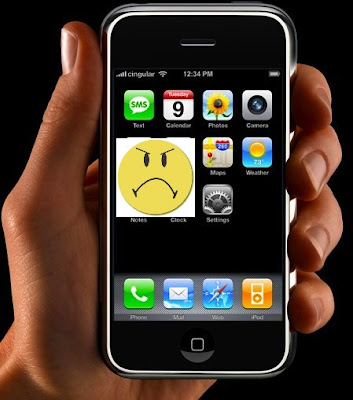 Anyone who has known me for any length of time knows my computer love is reserved for all things Mac. I've been using Macs since 1985, owned my first in 1990, and am typing one one now. I do use PCs when I have to, but using a Mac is like wearing my own comfortable clothes.

Apple has long been considered a progressive company, not only technologically, but socially. Heck, they even donated $100,000 to the recent No on Pro. 8 campaign here in CA. But this really makes me sad, and is hardly progressive:

Walmart has started to sell the iPhone 3G at nearly 2,500 Walmart stores beginning Sunday, December 28, 2008. The retailer is offering the black 8 GB iPhone 3G model with the price of $197 and the 16 GB black or white model for $297, with a new two-year service agreement from AT&T or qualified upgrade.

Damn. Hardly surprising, I guess. Profit transcends ideology for most companies. And for some other allegedly progressive folks too, who felt a need 2 years ago to get in bed with awful Walmart:

Don Henley is famous for his green causes and bad temper. Wal-Mart is famous for hyper capitalism and exploitation of its workers. What do these two parties have in common? Well they are now in business together, probably for the rest of Henley’s life.

An announcement on October 18 claimed that The Eagles are giving Wal-Mart an exclusive on their upcoming recordings that will be made and released sans major label.


Bastards. All of them.
Posted by SteveAudio at 7:56 PM