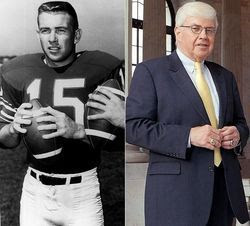 Jack Kemp, the star football player who later became a stalwart Republican congressman and Presidential candidate, passed away Saturday at age 73. Kemp Partners, his lobbying and consulting firm, disclosed in January that he had cancer.

Born and raised in Los Angeles, Kemp was a star athlete at Fairfax High School. He also excelled at studies, enjoying reading history and philosophy. Considered too small for a major-college program, Kemp enrolled at Occidental College, where he became the starting quarterback. He led all small-college quarterbacks in passing his senior year. Drafted by the Detroit Lions in 1957, he spent three seasons bouncing around the NFL, earning little playing time. A brief stint in the Canadian Football League was also unsuccessful. Kemp's break came with the formation of the American Football League in 1960. He won the starting quarterback's job with the Los Angeles Chargers and led them to the AFL championship game, repeating the feat the next season as the franchise moved to San Diego. Moving on to Buffalo, he led the Bills to three consecutive AFL championship games in 1964-66, winning the title in '64 and '65, and missing out on playing in the first Super Bowl as the Bills lost to Kansas City in '66. Kemp retired after the 1969 season, the last before the AFL-NFL merger. Of the AFL's ten seasons, Kemp was named to seven league all-star teams, and started at quarterback in five of its championship games. He is the AFL's all-time leader in career pass attempts, completions, and passing yards.

Kemp's interest in politics was sparked by working in Barry Goldwater's 1964 Presidential campaign and Ronald Reagan's 1966 campaign for governor of California. He became an avid reader of free-market apologists Friedrich Hayek and Ayn Rand. Yet he also showed a genuine concern for racial equality and economic fairness, and his political career was marked by his attempts to balance his concern for working-class Americans with his laissez-faire approach to economics. He was elected to Congress from a Democratic-leaning suburban Buffalo district in 1971, and would hold the seat for nine terms. In Congress, Kemp became a leading proponent of the theory that tax cuts would spur economic growth. He supported flat-tax proposals, lowering taxes on business, and promoted the creation of "enterprise zones" that gave tax breaks to businesses as an incentive to locate within them. Kemp was also one of the first Republicans to assert that balanced budgets were not important. His greatest legislative accomplishment was the Kemp-Roth tax cut, a 23 percent reduction over three years enacted by President Reagan in 1981. At the same time, Kemp became one of the rare Republicans who supported civil rights legislation, affirmative action, and immigrant rights. Kemp, though, also took more traditional GOP positions such as opposition to abortion and support for the Nicaraguan contras.

Kemp made a bid for the White House in 1988. The Republicans' long march to the right was in full swing by that point, though, and by then he was considered a moderate, even to some a liberal, by GOP standards. Kemp pulled out of the Presidential race following a disastrous Super Tuesday showing in which he received fewer delegates than George H. W. Bush, Bob Dole, and Pat Robertson. Eventual winner Bush named Kemp his Secretary of Housing and Urban Development. Kemp would spend most of his HUD tenure cleaning the department up from the scandal-ridden Reagan years, leaving little time to pursue his policies of developing enterprise zones and tenant ownership of public housing. Kemp's last role in the spotlight was as Vice-President on the 1996 Republican ticket running alongside Presidential candidate Bob Dole. The choice of Kemp as VP candidate was a surprise, as Dole vehemently disagreed with Kemp on economic issues, and the two constantly antagonized each other during their years as GOP leaders in Congress. Following the Dole-Kemp loss in 1996, Kemp never again sought elective office, and spent the rest of his life lobbying for free-market legislation and with charity work. He was an early supporter of John McCain's unsuccessful 2008 Presidential bid.

Jack Kemp's voice in the political conversation will be missed, not least because he represented a fast-vanishing breed, the reasonable conservative.

(Crossposted at Pole Hill Sanitarium and They Gave Us A Republic.)
Posted by dr sardonicus at 1:50 PM