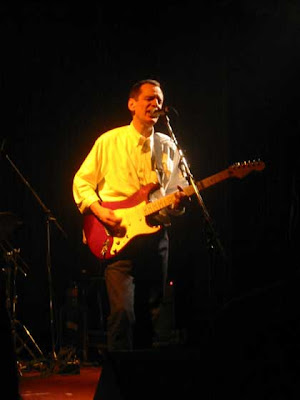 Alex Chilton, who first shot to fame in the 60's as lead singer of The Box Tops, and later became an inspiration for scores of indie rockers, passed away Wednesday at age 59, having suffered a heart attack.

Chilton was born December 28, 1950 in Memphis, and during his early years absorbed the diverse currents of his hometown's music scene. In his early teens he joined a local rock/R&B combo, The DeVilles, who were later renamed The Box Tops. The group was noticed by producers Dan Penn and Chips Moman, and in the spring of 1967 entered the studio with Penn to record some tracks. Penn chose "The Letter" from a demo tape sent by upcoming Nashville songwriter Wayne Carson Thompson; The Box Tops' recording became an instant classic of 60's blue-eyed soul. Chilton laid down an impressive vocal track - a teenager in his first recording session, he sang like a veteran R&B performer. "The Letter" topped the US charts on September 23, holding the #1 position for four weeks, and becoming a major hit in nearly every country it was released. At age 16, Alex Chilton was an international superstar.

More hits followed in a similar vein - "Neon Rainbow", "Cry Like A Baby", and "Soul Deep" all sold well, although none approached the stature of The Box Tops' debut. Despite their overnight success, the group's members were quickly becoming frustrated by the musical pigeonhole their producers had put them in, with Chilton in particular becoming interested in British rock as epitomized by The Beatles and The Who. Other group members were angered by being replaced by session musicians in the studio on occasion. The Box Tops slowly drifted apart, finally disbanding in February 1970. Chilton spent some time in New York sharpening his vocals and guitar skills. Returning to Memphis, he put together Big Star with like-minded local musicians, most notably the talented singer/songwriter/guitarist Chris Bell.

Beginning with 1972's #1 Record, Big Star put together three albums of erratic, if often brilliant, power pop. Bright guitars contrasted with Chilton's increasingly moody vocals, especially on the group's latter two releases, Radio City and Third/Sister Lovers, both recorded after Bell left the group. The early 70's, though, were not a good time for jangly guitar pop, no matter how innovative. The Beatles were still fresh in everybody's memory; bands who reflected the Fab Four's influence were subject to unfair comparisons with the masters. Big Star's affiliation with Stax/Ardent Records put the group at a further disadvantage. The Memphis label's experience was primarily with soul and R&B acts, and they had little idea how to promote or market a white rock group. Big Star's recordings barely made a dent with radio or the public, and the frustrated group disbanded in 1974. Chris Bell's career came to a tragic end in 1978 when he died in an auto accident.

Alex Chilton, teen superstar, was now considered washed-up by the music industry at 25. Depressed by the failure of Big Star, he spent the next few years making a series of indifferent recordings while being dogged by rumors of alcohol and drug problems. He had another stint in New York in the late 70's where, influenced by the scene at CBGB's and other punk venues, he adopted a rawer, looser style. He settled in New Orleans in 1982, where he would call home for the rest of his life. Now free of alcohol and drugs, he was notable on the New Orleans scene for the rest of his career as a singer, songwriter, guitarist and producer. His recording and performing habits remained somewhat hit-and-miss, however. With hindsight, it appears that Chilton simply wanted to work at his own pace, and having already rode the pop music merry-go-round, had no desire to climb aboard it again.

During the 80's, a new breed of American power-pop artists emerged; heavily influenced by Big Star and similar groups, they regarded Chilton as an icon. REM openly praised Big Star's work, and in 1987 The Replacements recorded their tribute "Alex Chilton", as well as inviting him to play on their album Pleased To Meet Me. Revived interest in Big Star led to the group coming together for a reunion in 1993. They have reunited intermittently ever since, and also recorded a new album in 2005. Chilton also participated in a Box Tops reunion in 1997.

For much of Alex Chilton's career, his was a talent lost in the wilderness. But for those familiar with The Box Tops' history, or for those who heard Big Star's erratic genius, Chilton will be remembered as a true rock legend, one whose stature will only continue to grow as the years pass.

Posted by dr sardonicus at 5:19 AM