And we'll keep on fighting to the end

So the Health Care Reform bill passed the house tonight, but not without some drama.

You see some crazy screwed-up things in the bloggersphere and Twitterverse, especially from right. And the craziest stuff has been from tea-partier types, with muddled ldeologies ranging Randian Glibertarians to authority-seeking right-wingers.

But tonight, when Twitter was flying a00 mph with both pregressive and conservative Tweets, debating and arguing the impending Health Care legislation vote, we got this: 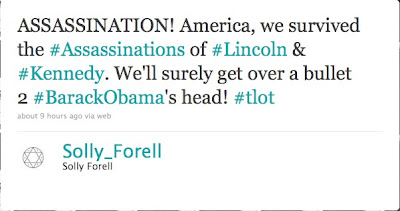 Solly really should know better, because that kind of crap is seriously verboten. No serious GWBush hater ever wished for his demise, that isn't done in polite society. But the right these days seem driven by hate.

Hortense at Jezebel has more:

Forell then followed that tweet up with this one:

That tag he added? #TCOT? It stands for "top conservatives on Twitter."

According to his Google profile, Forell is the author of a blog titled Barack Obama Was An American Electorate Mistake, which centers around Forell's disappointment in Obama's presidency. This disappointment spills over into Forell's other blogs, including Anybody But Barack Obama 2012, and The Audacity of Hype, which both touch upon Forrell's disgust with the "cult" of Obama, "a man who has done little with his life, but has written about his achievements as ifhe had found the cure for cancer in between winning a marathon and building a nuclear reactor with his teeth."

Forell may think he's protected by the First Amendment when it comes to his tweets, but the law begs to differ, specifically 18 USC Sec. 871:

You'll note however, that there's nothing specified about electronic threats. Perhaps that's why, as of now, Forell's Twitter account does not appear to be suspended; the tweet threatening the President's life was posted roughly six hours ago and has not yet been removed.

You'll note however, that there's nothing specified about electronic threats. Perhaps that's why, as of now, Forell's Twitter account does not appear to be suspended; the tweet threatening the President's life was posted roughly six hours ago and has not yet been removed.

Update: While Forell hasn't removed the offensive tweets, he has posted an apologetic P.S.:

Uh, maybe the President would respect your opinion more if you didn't, you know, encourage people to kill him. Just a thought.

Update #2: Forell is now backtracking like crazy, complaining about "whining liberals" and asking that we "all renounce the harsh rhetoric about the POTUS. Several, including myself, hv used inappropriate language. Let's remain civil!" A little too late, I'd say.

We have removed this profile due to violation of Twitter's Rules, specifically listed under "Content Boundaries and Use of Twitter": *Unlawful Use: You may not use the service for any unlawful purposes or for promotion of illegal activities.

It is against the Twitter Terms of Service to use the service to commit illegal acts. Threatening the life of the president (or president-elect) is a federal offense under Title 18, USC, section 871. All accounts in violation of our Terms of Service are permanently suspended and we report to legal authorities accordingly.

However, as of 6:06 pm EST, Forell's account appears to still be up and running.

And though Twitter sent an email earlier declaring that Forell's profile had been removed, it appears that only the assassination-related tweets have been deleted from his account: as of 9:00 pm EST, his account still appears to be active.

You'd think that a conservatarian who favors a small government with scads of "Freedoms™" for personal action and free speech would have a clue that even in a virtual anarchy, someone makes the rules. Even in Thunderdome there was a boss. By actually calling for Presidential assassination, one gets the clearly unwanted attention of authorities, whose job it is to protect the POTUS, whether it's GWBush, Richard Nixon, or Barack Obama.

So Solly, that's really sweet you apologized, sort-of, but you went way over the line. If the Secret Service jams you up, it serves you right. You earned it.

Bastard.
Posted by SteveAudio at 6:37 PM