So long, it's been good to know you

Here's a picture of Teddy Kennedy no one has seen before: 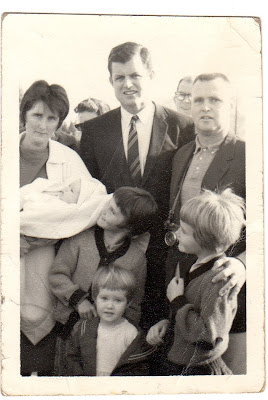 Pam's dad took it in Superior, Wisconsin in 1961 when Teddy was on the stump for his brother's Presidential campaign. On the back is written:

His seven weeks spent in Wisconsin helped his brother win the first contested primary of the season there, and similar time spent in Wyoming was rewarded when a unanimous vote from that state's delegates put his brother over the top at the 1960 Democratic National Convention.

Teddy was flawed, as the right-wingers keep pointing out. But I'm pretty sure he really cared about people. Why else would he work as a Senator when he had family money, and why else would he fight for things like universal health care, instead of enriching corporations and giving his family tax cuts.
So long, Teddy.
Update and corrections:
Clearly, in '61, Jack Kennedy was no longer campaigning because he had already won. Thus, Teddy wasn't stumping anymore.
And the picture was taken (as Pam corrected me) after her family had already moved to Riverside, CA. Ed Gagnon was a part-time employee of her dad.
So the whole Wisconsin quote above is barely interesting and not at all relevant. Still, it's a cool personal picture of Teddy Kennedy.
Posted by SteveAudio at 4:59 PM