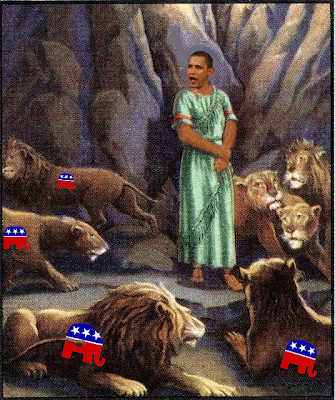 (Picture by Dancin' Dave)
Many on the left, especially in the bloggersphere, have been Pres. Obama's harshest critics. The right has complained too, but their criticisms have been largely insane (Kenya, birth certificate, black Hitler, etc).

I've been disappointed on certain things as well: Extending the Afghan War, slow pullout of Iraq, weak shepherding of Health Care reform, no Bush/Cheney impeachment yet . . . OK, I just threw that in to see if you were paying attention. I even understand his position on DADT; he doesn't want an easily-overturned Presidential decree, he wants Congress to do its freakin' job!

Anyway, I felt early on that Obama was the stronger of the 2 main candidates for 2 reasons:

And I'm not hating on Hilary, so don't take umbrage at that statement, Lambert. I just mean that the far-right was so mobilized against her, that he, even being black, would have the easier time. Yes, she would have been a fine President, but in '08, wasn't gonna happen.

Last Friday he stepped up to the plate and delivered a home run against the supposed roughest team in DC:

Today the President did something unusual in American politics – initiated an open dialogue with members of the opposite party. Visiting the House Republican retreat, he took questions on anything they wanted to talk about. He heard them out, acknowledged where they were right, and gave a genuine explanation where he felt they were wrong.

Mike Madden at Salon offers an analysis from a liberal (my favorite) perspective:

When Rep. Mike Pence tried to push him to commit to "across the board tax cuts," Obama pointed out that the stimulus plan did cut taxes for millions of Americans -- but he couldn't resist twisting the knife a bit. "What you may consider across-the-board tax cuts could be, for example, greater tax cuts for people who are making a billion dollars," he said, tying his answer into the Democratic effort to paint Republicans as friends of the rich without blinking. "I may not agree to a tax cut for Warren Buffett. You may be calling for an across-the-board tax cut for the banking industry right now. I may not agree to that." He mocked the GOP for voting in lockstep against the stimulus bill, then trying to take credit for projects it funded: "A lot of you have gone to appear at ribbon cuttings for the same projects that you voted against." Sixty-eight of them, to be exact, according to the Democratic Congressional Campaign Committee.

The whole thing basically went like that: Republican asks obnoxious question rooted in Glenn Beck-ian talking points; Obama swats it away, makes the questioner look silly, and then smiles at the end. It got so bad, in fact, that Fox News cut away from the event before it was over. Democratic operatives around Washington watching it had pretty much the same reaction: "Where the hell has this guy been?" One source said GOP aides probably wished they'd spoken to John McCain "about what happened to him in the presidential debates" before they broadcast the event. "It's quite a show," a White House official said, apparently going for the same deadpan tone the president was.

I enjoy a good debate about issues, as long as both sides are honest. And that has become the Republicans' problem more and more over the last few election cycles. Hell, that's not true. Dishonesty and propaganda have been arrows in the Republican quiver since the Nixon/Gahagan-Douglas campaign in 1950:

In 1950, Gahagan Douglas ran for the United States Senate even though the incumbent Democrat Sheridan H. Downey was seeking a third term. William Malone, the Democratic state chairman in California, had advised Douglas to wait until 1952 to run for the Senate, rather than split the party in a fight with Downey. Gahagan Douglas, however, told Malone that Downey had neglected veterans and small growers and must be unseated. Downey withdrew from the race in the primary campaign and supported a third candidate, Manchester Boddy, the owner and publisher of the Los Angeles Daily News. When Gahagan Douglas defeated Boddy for the nomination, Downey endorsed the Republican U.S. Representative Richard M. Nixon.[1]

In the race against Nixon, Gahagan Douglas was considered by many liberals to have been the prototypical victim of a smear campaign. Alluding to her alleged Communist (or "Red") sympathies, Nixon hinted that she was a fellow traveler, citing as evidence her supposed Communist-leaning votes in Congress. Boddy had referred to her as "the Pink Lady" and said that she was "pink right down to her underwear." Nixon reprised this line of attack during the general election. His campaign manager, Murray Chotiner, even had flyers printed up on sheets of pink paper, to underline the point. However, it is not widely known that the personal and political attacks between the opponents began when Douglas professed that Nixon was a fascist [2]

Gahagan Douglas, in return, popularized a nickname for Nixon which became one of the most enduring nicknames in American politics: "Tricky Dick". Nonetheless, Nixon won the election, with over 59 percent of the vote. Gahagan Douglas' political career hence came to an end. The conservative Democrat Samuel W. Yorty (later a Republican convert) succeeded her in Congress.

Back to Madden in Salon:

Republican aides tried to argue that Obama was struggling to get past his initial talking points, but that was a pretty desultory attempt at spin. By the time Obama was done, and had stayed about 30 minutes past when he was scheduled to leave, Republican leadership was ready to get him out of the room. One GOP lawmaker asked for one more question, and as Obama started to say he was out of time, Pence jumped in, too: "He's gone way over." And with that, Obama took his booklet of GOP policy proposals and left the room -- in much better political shape, possibly, than he was when he walked in.

Indeed. Look, I know this doesn't erase several missteps by the White House in the first year, but for most of us, this was a nice reminder of why we voted for the guy in November '08: He's smart, not a rigid ideologue, doesn't make knee-jerk decisions, and has actually got some stuff done we like:

In the weeks approaching President Obama's first State of the Union address, some in the media have claimed that Obama has lacked accomplishments in his first year as president and thus, in the words of Washington Times editor emeritus Wesley Pruden, Obama has "little to show for '09." In fact, Obama's first year in office has been marked by a series of significant achievements, including creating jobs as a result of the economic stimulus, eliminating wasteful spending, increasing government transparency, and expanding federal health insurance programs to cover millions more children.

During the campaign there was a wry Lolcat-style graphic making the rounds, kinda sorta covers this issue: 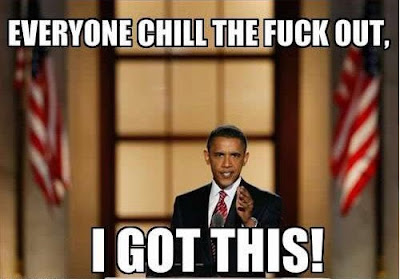 I'm disappointed that we all don't have ponies yet, but at least we don't have the shit sandwiches we'd be eating if McCain/Palin had won. I imagine Sarah would have already bolted, leaving us with VPOTUS Cheney again, as poor McCain had to scramble to fill the opening.

In other words, it could be way the Hell worse.


Many songwriters are not the best interpreters of their songs, Leonard Cohen for example. And one can make the same argument for Bob Dylan. Here's a wonderful version of his "Don't Think Twice It's Alright" by PP&M:
Posted by SteveAudio at 12:04 AM