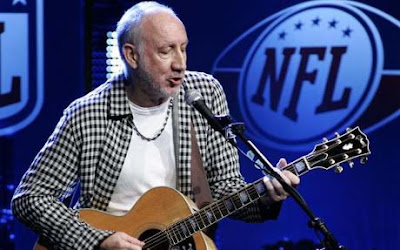 Put me in, coach!

The first Super Bowl halftime show featured trumpeter Al Hirt, joined by the marching bands from the University of Arizona and Grambling University, along with some high school marching band members to fill up the field. Like the game itself, Super Bowl halftime shows became more and more extravagant with the passing years, reaching their apex with Janet Jackson's infamous "wardrobe malfunction" during Super Bowl XXXVIII. That brief glimpse of Jackson's bare boob scared the hell out of the TV networks, leading to a virtual ban on halftime entertainers not eligible to draw Social Security.

This brings us to The Who, the latest geezer rockers to grace the NFL's premier spectacle. They're not really The Who anymore, as Keith Moon and John Entwistle have passed on to The Great Gig In The Sky, but Peter Townshend and Roger Daltrey (who begins a tour with Eric Clapton following the game) carry on, even if they are no longer capable of releasing the raw torrents of sound they regularly unleashed in their heyday.

In their younger years, they were truly something for the eyes and ears to behold. Their fierce sound literally assaulted the ears - the Guinness Book Of World Records lists them as the loudest band in history, although the metal act Manowar claims to have broken The Who's long-standing mark for most decibels achieved in concert. They were every bit as aggressive-looking on stage as they sounded. Daltrey's voice roared as his lion's mane of hair flew; when not singing, he slung his microphone through the air like a lariat. Townshend windmilled his right arm high above his head, bringing it down to strike jagged chords on his guitar. Moon flailed his arms wildly about, creating chaotic drum patterns as he seemingly struck his skins at random, while Entwistle stood rock-solid still, anchoring his bandmates with mountains of booming bass. Each show climaxed with Townshend smashing his guitar into the amp as Moon knocked his drumkit over and smashed it to bits, bringing the house down with an avalanche of feedback and raw noise.

Sunday's performance will almost certainly pale in comparison to the glory days, but The Who have long since earned their right to stand on the world's great stages. Since it will apparently be many years until The Album Project reaches their end of the alphabet, I hereby present my quick 'n' dirty guide to the band's recordings, including five-star ratings a la Rolling Stone.

My Generation (*****): One of the rawest, most powerful debuts ever. Arguably the precursor to punk rock, The MC5, The Stooges, The Ramones, and The Sex Pistols would be inconceivable without this release. The British version features one of the greatest album covers ever. The US version, The Who Sing My Generation, has a slightly different track listing.

A Quick One (***): Known as Happy Jack in the US. The band knew they couldn't survive on raw power forever, and they began transitioning towards more complexity. "A Quick One While He's Away" is Townshend's first attempt at extended story-telling.

The Who Sell Out (****): The band mimics a pirate radio station, complete with jingles and diverse musical styles; the result is a magical artifact of psychedelia. The magnificent "I Can See For Miles" features the greatest one-note guitar solo ever.

Tommy (****): Townshend's pioneering rock opera is today celebrated as much for its cultural impact as for its songs. The storyline hangs by a thread, but classic tracks like "Pinball Wizard" and "We're Not Gonna Take It" insure Tommy's place in rock history.

Live At Leeds (****): The live act captured in all its thundering glory. The expanded CD version is essential. Highlights include an extended version of "My Generation" featuring segments from Tommy.

Who's Next (*****): This may well be the greatest rock album ever. You know all these tracks from being played on the radio repeatedly over the last four decades; if not, get yourself to a record store or download immediately, for you cannot truly know rock 'n' roll without knowing Who's Next.

Quadrophenia (***1/2): The story is better-developed than on Tommy, and the dense sound, particularly on tracks like "5:15" and "Love Reign O'er Me", is revelatory. Yet there are also times where Quadrophenia sounds almost too cold, too cerebral, and it's one that I've never been able to warm up to completely.

Odds & Sods (***1/2): Self-explanatory; it consists of various outtakes and forgotten tracks that piled up over the band's first decade. "Naked Eye" and "Long Live Rock" elevate Odds & Sods over the run-of-the-mill outtakes compilation.

The Who By Numbers: (****1/2): Realizing he wouldn't die before he got old, Townshend comes up with a winning reflection on aging. Although I wasn't so sure of this album when it was released, it continues to grow on me as the years pass, which is as it should be.

Who Are You (****): A well-crafted, powerful set that suggests that The Who had found a way to age gracefully. Sadly, Keith Moon died three weeks after the LP was released, and things would never be the same.

The Kids Are Alright: (***): More outtakes, alternate versions and rare tracks. The accompanying movie of the same name was a fine overview of the band's career.

Face Dances: (**1/2): Bravely carrying on with new drummer Kenney Jones, Moon's death and the 1979 Cincinnati concert tragedy seemed to sap the band's strength. "You Better You Bet", "Another Tricky Day" and Entwistle's "The Quiet One" stand out.

It's Hard: (**): This half-hearted effort marks The Who's logical end. Funk wasn't exactly their thing, but "Eminence Front" is just about the best thing here.

I haven't bothered with Who releases since 1982; as noted, I consider It's Hard to mark a logical endpoint. Nor have I listed compilations; Meaty Beaty Big And Bouncy is still the most direct, while those wanting to complete their Who collection should check into 30 Years Of Maximum R&B, which compiles many of their tracks unreleased on their regular LP's along with many rarities.

(Crossposted at Pole Hill Sanitarium.)
Posted by dr sardonicus at 5:06 AM