Clowns on the Left of Me, Jokers to the Right 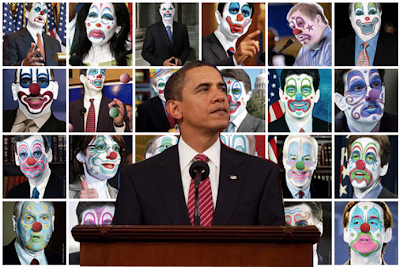 An open letter to our corporate sponsored 'elected' offals (sic):

No matter what you do,
They will never be for you,
...
No matter where you go,
No matter what you are.
...
Knock down the old grey wall
Be a part of it all
...
Nothing to say, nothing to see
Nothing to lose.*
***********
I've always thought in lyrics because others have said it shorter and smarter than I can. Even if the point and subject were not what they intended.

In my own words:
Dear Mr. President,

Stop trying to placate people who literally want you dead. The teabaggers and many elected republicans have said so, check the tape. Stop trying to play nice with Dems who only care about re-election.

We need jobs in this country, we need health care for everyone in this country. The lack of health care is costing lives AND jobs. You've said great things over the last few weeks, now start doing them. This isn't a damn popularity contest, you've already won that, this is your job and millions of people's lives are at stake.

Stand up & fight for what you believe in, and be a one term president if that's what it takes. Of course you'll be portrayed as combative or irrational, but how can that possibly be worse that how you're currently portrayed?

If you do that you'll get a second term and can carry thru with the policies the country needs and you were elected on.

* Apologies to Bad Finger for the adaptation. I hope this makes it up to them:


Cross posted at VidiotSpeak
Posted by The Sailor at 5:26 PM

What's up, I check your new stuff on a regular basis. Your writing style is awesome, keep doing what you're doing!