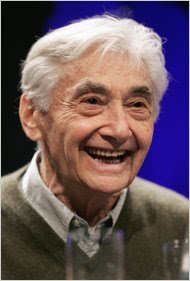 Historian and activist Howard Zinn passed away Wednesday at age 87. Zinn's family said that he had had a heart attack while swimming in Santa Monica, CA.

Howard Zinn was born August 24, 1922 in Brooklyn to a Jewish immigrant family. His parents were factory workers with little education, and Zinn's introduction to literature came when they sent 25 cents and a coupon to the New York Post in return for a collection of Charles Dickens' writings. He joined the Army Air Force in World War II. As a bombardier, he participated in attacks upon Berlin, as well as parts of Czechoslovakia and Hungary. At Royan, in southwest France, he also took part in one of the first attacks using napalm. After the war, Zinn found out that the napalm attack killed 1500 innocent French along with the German soldiers in hiding there. This discovery helped influence Zinn's decision to become a pacifist in later years.

Zinn attended New York University on the GI Bill. He moved on to Columbia for his postgraduate work, earning his Ph.D. in history with a minor in political science in 1958. By that time he had landed his first job in academia, as chairman of the history and social studies department at Spelman College in Atlanta. His experience at the historically black women's college led to involvement in the civil rights movement. Among his students were author Alice Walker and Children's Defense Fund founder Marian Wright Edelman. But Zinn's increasing political activity, notably his work in advising the Student Non-Violent Coordinating Committee, angered the school's administration. In 1963, Spelman fired him for insubordination.

The next year, Zinn took a position in the political science department at Boston University. His classes on civil liberties quickly became among the most popular on campus. Once again, Zinn became heavily involved in political activism, particularly the efforts to stop the Vietnam War. In 1968, his diplomatic visit to Hanoi with the Rev. Daniel Berrigan resulted in the release of three US prisoners of war, the first set free since the US bombing of North Vietnam began. Later, he helped edit a set of government documents secretly copied by Daniel Ellsberg that became known as the Pentagon Papers, and served as an expert witness at Ellsberg's trial for theft, conspiracy, and espionage.

Of the many books Zinn wrote during his career, the best-known was A People's History Of The United States, published in 1980. Ever since participating in the civil rights marches of the 60's, Zinn had noticed that history almost always had been focused from the perspective of society's most powerful, and his goal was to create a textbook that contained the voices of America's lower classes, and to present a side of the historical narrative that had been overlooked. A People's History, by frequently casting America's past leaders as greedy, bloodthirsty exploiters, caused a stir among historians when first published. Nevertheless, the book spurred further efforts to consider history from alternative viewpoints, particularly those of the poor and minorities. A People's History became an unlikely popular success as well, with nearly 2,000,000 copies sold.

Zinn retired from teaching in 1988. In typical fashion, he finished his last class and then hurried off to join a picket line. He continued to write with regularity, with his articles frequently appearing in publications such as The Progressive and The Nation, and also continuing to write books, including several highly critical of the Iraq War. One of his last projects was a documentary, The People Speak, based on his A People's History and featuring appearances by Matt Damon, Josh Brolin, Rosario Dawson, Bob Dylan, and many others. In one of his last interviews, Zinn said he wanted to be remembered "for introducing a different way of thinking about the world, about war, about human rights, about equality," and "for getting more people to realize that the power which rests so far in the hands of people with wealth and guns, that the power ultimately rests in people themselves and that they can use it." Indeed, Howard Zinn was highly successful in getting millions to reconsider how they thought about history and America's relationship with the world, myself included.

I highly recommend visiting The Nation's website and checking out the videos featured in their Howard Zinn tribute. Zinn also returned to Spelman College in 2005 to give the commencement address. That speech is one of Zinn's most stirring moments, and a good introduction for those unfamiliar with the rest of the historian's work.