Well, I'm going where the water tastes like wine

There were many wonderful bands in L.A. in the late '60s. Among them was a blues band called Canned Heat. I was lucky to see them several times, including both these memorable gigs:

Also recorded live at the Kaleidoscope around this time was the album which would find later 1971 release with the deceptive title, Live At Topanga Corral (later renamed Live at the Kaleidoscope), under Wand Records; as Liberty Records didn’t want to release live album at the time and manager Skip Taylor did not want a lawsuit.[9] The band would end 1968 in a big way at a New Year's show in L.A.'s Shrine Auditorium with Bob Hite riding a painted purple dayglo elephant to the stage[10].

Actually, it was the Shrine Exposition Hall, on the north side of the Shrine Auditorium, where many great concerts took place in the mid-late '60s. The elephant with Bob 'Bear' Hite riding came in from the main entrance doors, and walked slowly toward the stage. Bear was wearing nothing but a diaper, as a proper New Year's baby should do. When they got to the stage, Bear hopped onto the stage and the elephant, who I assume was being led by a handler, left peacefully.

Here's a poster from the Kaleidoscope concert. I'm pretty sure it was Saturday, March 23 when I went with 2 friends/band members: 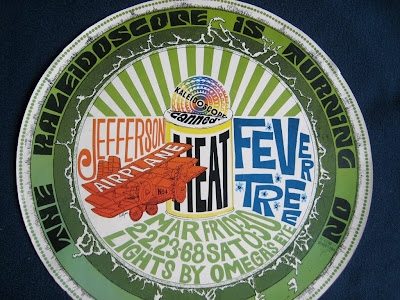 I had a poster for this show for many years, I guess it's lost now. The building housing the Kaleidoscope has been many venues during its life, as this web site presents:

The glamorous supper club - theatre was built by Carroll to supplement his highly successful New York landmark. The lavish establishment featured a huge revolving stage, swings which dropped from the ceiling, &
"The Most Beautiful Showgirls
in the World".

Later, in the mid 60s, after the successful run of John Hartmann's Kaleidoscope, The theater was home to Gary Bookasta's "the Hullabaloo", a popular teen hangout/nightclub which featured many of the popular new bands (Yellow Payges, Palace Guard, Wild Ones, Pat & Lolly Vegas, etc.), of the era.

The theater would later undergo major renovations and reopen as the Aquarius Theatre, home of the West Coast production of the revolutionary stage musical, "HAIR". The Aquarius also became known for staging Rock Concerts featuring many of the biggest 60s groups.

Here's what was special about Canned Heat. From the Playboy After Dark series, this live appearance shows both raw blues as well as the lovely "Going Up The Country" as sung by Alan 'Blind Owl' Wilson. Note especially Blind Owl's superb blues harp playing. The opening and ending are cut off, but it's still a fine performance by one of L.A.'s best blues bands: