You're the devil in disguise

Well, Robertson has pissed into the punchbowl of decent people everywhere:

"Something happened a long time ago in Haiti and people might not want to talk about," Robertson said Tuesday.

"They were under the heel of the French, you know Napoleon the third and whatever. And they got together and swore a pact to the devil. They said 'We will serve you if you will get us free from the prince.' True story. And so the devil said, 'Ok it’s a deal.' And they kicked the French out. The Haitians revolted and got something themselves free. But ever since they have been cursed by one thing after another," Robertson said.

First, your history is wrong. Napolean Bonaparte, not 'Napolean the third and whatever' sent 20,000 French soldiers to retake the island after they wrote a new constitution. Problem was that yellow fever decimated the French army which was then beaten by Haitian forces. Satan had no part in this struggle. Napolean III wasn't even born until 1808, 6 years after the Hatian Revolution.

Second, what in Hell is wrong with you? I'm pretty sure Jesus, who you claim to worship and adore, wouldn't discuss the reason for the earthquake before wading in to help the poor Haitian people. And He might take issue with your bitching about it:

'I tell you the truth, when you did it to one of the least of these my brothers and sisters, you were doing it to me!'

So for the first time in 2010, I hereby award our Golden Douch award to Pat Robertson: 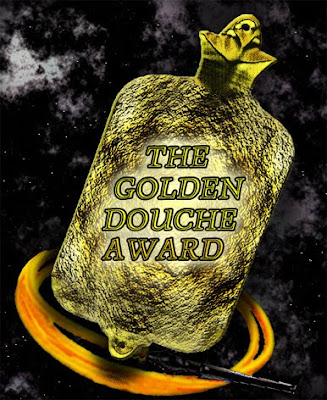 Places to donate to Haitian Relief:

Either you can use your cell phone to text “Yele” to 501501, which will automatically donate $5 to the Yele Haiti Earthquake Fund (it will be charged to your cell phone bill), or you can visit Yele.org and click on DONATE.

Those wanting to aid in relief efforts can also text "HAITI" to 90999 to donate $10 to the American Red Cross.

Your gift today will support emergency medical care for the men, women, and children affected by the earthquake in Haiti. Please give as generously as you can to our Haiti Earthquake Response and help us save lives.

Sailor here, what SteveAudio said and some more links:

Oxfam-Earthquake hits Haiti – help urgently needed
I've worked with Oxfam before at benefits. They are among the best international charities I know of.

You want to volunteer, but not sure how? These people may be able to help.

The next time someone says there's no difference between Bush and Obama? You have my permission to set them straight.
Posted by SteveAudio at 5:16 PM