So 600 incoherent mouth breathers show up for a teabagging convention, (quick aside: teabagging and mouth breathing seem to be incompatible, but what do I know ;-), and it makes the news 24/7. Srsly!?

Sheesh, there were more people at the my local watering hole on a Monday songwriters' night.

Let's do some math: 600 attendees @ $550 each = $330,000. The Quitta from Wasilla, Falin' Palin, AKA Moosealini, reportedly charged $115,000. So over 1/3 of the proceeds went to an already rich person. The rest went to the for-profit company that put the event, and the participants, on (minus hall rental, advertising, &c.). Nice teabagging there Clem.

Why isn't that the news?

2 notable things about this tiny gathering:
1) Former Congressman and presidential candidate Tom Tancredo's frankly racist and xenophobic opening speech. A low light from the prepared speech (that differed from the actual speech):

because we don’t have a civics literacy test to vote, people who couldn’t even spell vote, or say it in English, put a committed socialist ideologue in the White House named Barack Hussein Obama.

I remember when 'literacy tests' were stuck down. It's a good thing for him that literacy tests aren't required to have children, otherwise 'uncle daddy' and his daughter/his sister (it's Chinatown, Jake) couldn't have spawned the minuscule crowd.

His whole speech, live not prepared, consisted of dog whistles. No wonder the 600 rode into that valley of wealth.

2) My personal favorite, Caribou Barbie had to write "budget tax cut" on her palm to remember her talking points in a PRE-SCREENED Q&A after her speech! 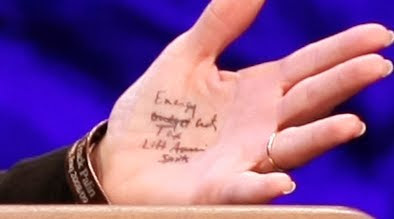 And no, I'm not kidding.

Wow, the apple didn't fall far from that tree!

It's kinda like seeing a 2 year old in full camo with an M16. It'd be funny ... if the switch wasn't set to full auto and the safety wasn't off.


Now for the title songs:

Cross posted at VidiotSpeak
Posted by The Sailor at 11:34 AM