Did you ever listen to your heart 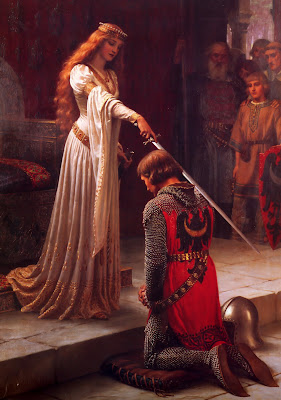 (The Accolade, by Edmund Blair Leighton)
Among the certainties of life are Death & Taxes. Oh, and repression breeds rebellion.

Saudi Arabia is a troubling, repressive U.S. ally. And apparent enemy, as it was home to 15 of the 19 9/11 hijackers.

Still, some progressive movement has taken place in Saudi Arabia. Music other than traditional Arabian is becoming popular, and women are becoming bolder, and rebelling against repression.

Among such women are The Accolade:

They cannot perform in public. They cannot pose for album cover photographs. Even their jam sessions are secret, for fear of offending the religious authorities in this ultraconservative kingdom.

But the members of Saudi Arabia’s first all-girl rock band, the Accolade, are clearly not afraid of taboos.

The band’s first single, “Pinocchio,” has become an underground hit here, with hundreds of young Saudis downloading the song from the group’s MySpace page. Now, the pioneering foursome, all of them college students, want to start playing regular gigs — inside private compounds, of course — and recording an album.

It's hard to know how supportive of these women we should be. On one hand, exposure and publicity will help their cause and careers. On the other, more notoriety may cause a backlash by the religious zealots in charge in Saudi Arabia:

Today, there is a growing rock scene with dozens of bands, some of them even selling tickets to their performances. Hip-hop is also popular. The religious police — strictly speaking, the Committee for the Promotion of Virtue and the Prevention of Vice — have largely retreated from the streets of Jidda and are somewhat less aggressive even in the kingdom’s desert heartland.

They took their name from the pre-Raphaelite painting "The Accolade", by Edmund Blair Leighton:

“I liked the painting because it shows a woman who is satisfied with a man,” Dina said.

Indeed. Their MySpace page is http://myspace.com/accoladeofficial. There you can listen to their first single, Pinocchio. Pop-metal, a lot of fun to listen to, and a cultural milestone.

Here's a brief video of the song "Pinocchio":