Hey, hey, hey Joe, you better run on down! 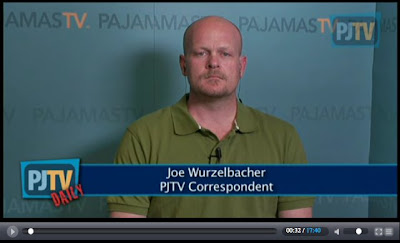 (No video, just pic. Bastards at PJTV won't let me download the video.
But I had to sign-up for a PJTV account to even get this screen capture. Eww.)
There are certain characters on the Right-wing that I've chosen not to give bandwidth to. Coultergeist, for example. (Note: no such restrictions are in place for any of the other contributors here, they are all free to express their own full-throated disdain for any winger fools. Or their disdain for Winger. Whatever.)

But someone I can't seem to leave alone is Sam Joe the douchebag Plumber, who continues on his triumphal tour of The War Zone™:

Continuing his reporting from Israel, Joe “the Plumber” Wurzelbacher tried to clarify his remarks criticizing media coverage of war, in a new Pajamas TV segment. He said that citizens “don’t need to see what’s happening every day” in war and said that it should be up to the military to decide what the media learns about war:

WURZELBACHER: you don’t need to see what’s happening every day, that’s my personal opinion, you don’t have to share it. But, you know, okay, you don’t have to see, you know, 800 dead, 801 dead. It’s like they drill that in your head. … They want you to sit there saying there are so many people dying. You know these are large, these are numbers, you know I don’t want to take away from that. Let me, uh, think about how to say that again. Just essentially, they keep drilling it into your head, newscast after newscast after newscast.

As might be expected, Pajamas Media TV is so fucking stupid that they proudly put the video of this itinerant fool up on the intertoobz for all to see.

And mock. So start mocking.

This video, from Roach Radio, while not entirely applicable to the above quote, still explains the lunacy well: