I biffs 'em and buffs 'em, and always out roughs 'em 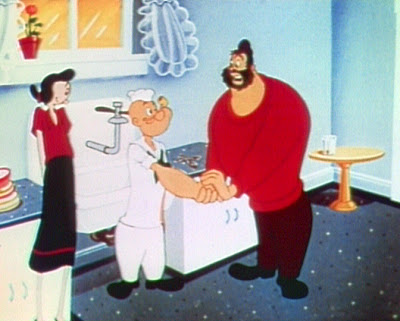 I had a bizarre email exchange with David Horowitz a few years ago, detailed here. No real point in re-visiting it now. So I feel a certain kinship with DH, not unlike the warm fuzzies Popeye must feel every time he sees or hears Bluto.

D-Ho seems to be having a birthday today, and davenoon at Lawyers, Guns & Money pays him appropriate homage:

In his new role as agitator against leftist indoctrination on American campuses, Horowitz has become a one-man Macy's parade, a giant, cartoonish, inflatable fuck-up bobbing goofily down the street. Whether he's toasting the unacknowledged blessings of chattel slavery, calculating the civilizational demerits of Native Americans, or sponsoring extended circle jerks like his "Islamo-Fascist Awareness Week," Horowitz has apparently decided to atone for his years as a Panther fanboy by turning himself into the archetype of the stupid Whitey, an unselfconscious apologist for The Man. Meantime, Horowitz's abounding intellectual dishonesty and his relentless capacity for self-promotion have earned him a "relevance" to the Right that he could never have enjoyed -- but which he so clearly craved -- from the Left. As political psychodrama, it's quite frankly embarrassing to behold.

Indeed. May your birthday cake & candles land squishingly atop your head.

Bastard.
Posted by SteveAudio at 11:32 AM