And when I feel my finger on your trigger 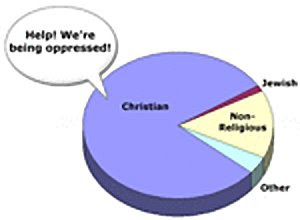 The man charged with murdering a high-profile abortion doctor claimed from his jail cell Sunday that similar violence was planned around the nation for as long as the procedure remained legal, a threat that comes days after a federal investigation launched into his possible accomplices.
[...]
Tiller's clinic had been a target of regular demonstrations by abortion opponents. Most were peaceful, but his clinic was bombed in 1986 and he was shot in both arms in 1993. In 1991, a 45-day "Summer of Mercy" campaign organized by Operation Rescue drew thousands of abortion opponents to Wichita, and there were more than 2,700 arrests.

Now let's take a look at the definition of 'terrorism' from Dictionary.com:

1. the use of violence and threats to intimidate or coerce, esp. for political purposes.
2. the state of fear and submission produced by terrorism or terrorization.
3. a terroristic method of governing or of resisting a government.

Now let's look at how our country defines it:

(d) Definitions
[...]
(2) the term “terrorism” means premeditated, politically motivated violence perpetrated against noncombatant targets by subnational groups or clandestine agents;
[...]
(5) the terms “terrorist sanctuary” and “sanctuary” mean an area in the territory of the country—
(A) that is used by a terrorist or terrorist organization—
(i) to carry out terrorist activities, including training, fundraising, financing, and recruitment;

So, by definition, what Scott Roeder did was terrorism. And it worked, Tiller's clinic,one of only 3 in the country, has closed it's doors. And Scott Roeder is celebrating that fact.

And while the anti-choice folks at Operation Rescue clutch their pearls and declaim him as a lone whacko, the facts are "the authorities found a slip of paper with the organization’s name in Mr. Roeder’s car when he was arrested, as well as the name of one of its leaders and her telephone number" and the 'leader' that the NYT didn't name is senior policy adviser Cheryl Sullenger, a terrorist that has been convicted of conspiring to bomb the Alvarado Medical Center in California. From her previous actions in helping track Dr. Tiller's movements it seems she should be indicted as an accessory.

I'm so glad you asked: Because they're white christains.

This movement is the American version of the Taliban. They seek to impose their religious values on others, subjugate women, and make America a theocracy.

Cross posted at VidiotSpeak
Posted by The Sailor at 3:19 PM