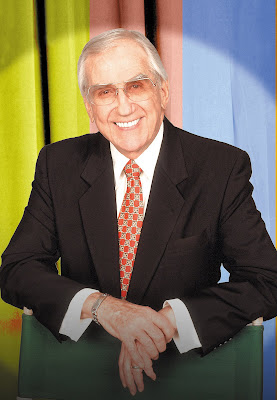 Ed McMahon, television pioneer, pitchman, and world's greatest sidekick, passed away Tuesday at age 86, having suffered ill health for the past several years.

Edward Leo Peter McMahon Jr. was born in Detroit on March 6, 1923. By the time he was 10, he wanted to be a radio announcer; at 15 he had his first announcing job, promoting a circus from the back of a sound truck. In World War II, he served in the Marines as a test pilot and flight instructor; he returned to the service in the Korean War piloting spotter planes. After WWII, he earned a degree in speech and theater from Catholic University in Washington, DC, paying his way through school by working as a pitchman for vegetable slicers on the Atlantic City boardwalk.

After graduating in 1949, McMahon took a $75/week job at the brand-new Philadelphia TV station WCAU. Within two years he was Philadelphia's most visible TV personality, hosting 13 programs on WCAU. He gained some national exposure in the 50's as an MC for several game shows. He got his big break in 1958, when he was hired to be the announcer on a new show hosted by Johnny Carson, Who Do You Trust?

The ebullient McMahon proved to be the perfect foil to the reticent Carson. Originally hired to announce the guests and read commercials, Carson quickly worked McMahon into his comic routines, especially poking fun at Ed's love of food and drink. He adapted to the job of straight man so well that when Carson was named to succeed Jack Paar as host of NBC's Tonight Show, he took McMahon with him. Over the next 30 years, McMahon established himself as the undisputed king of the sidekicks, developing an encyclopedia of catchphrases, knowing exactly when to laugh, and introducing Carson each night with his trademark, "Heeeeere's Johnny!!!" As McMahon explained it, "I was there when he needed me, and when he didn't, I moved down the couch and kept quiet." McMahon and Carson worked together 34 years in all, forming one of the great show business partnerships and becoming good friends as well. When Carson died in 2005, McMahon described his longtime partner as "like a brother to me".

During his over 50-year career on television, McMahon enjoyed an assortment of other prominent roles. From 1983 to 1995, he hosted Star Search, a talent-scout show that gave early exposure to the young Britney Spears, Justin Timberlake, and Rosie O'Donnell, among others. He was one of TV's most prominent pitchmen, some of his best-known spots included commercials for Budweiser, Alpo, and American Family Publishers. Every Labor Day for 41 years, he appeared with Jerry Lewis on his telethon for muscular dystrophy, and with Dick Clark, he co-hosted TV's Bloopers And Practical Jokes for several years.

McMahon's final years were somewhat sad. He broke his neck in a fall in 2007, accelerating his declining health status. The next year, it was reported that he was behind hundreds of thousands of dollars in payments on his Beverly Hills home. Donald Trump offered to buy the home so that McMahon would escape foreclosure, but McMahon made an agreement with a private buyer who leased the mansion back to him. Good-natured to the end, McMahon spoofed his financial difficulties in commercials for FreeCreditReport.com.

Ed McMahon will forever be remembered as the ultimate second banana. This Alpo commercial from The Tonight Show highlights several of McMahon's roles, and is a great example of the rapport he enjoyed with Johnny Carson.