I know how to fix the economy! All we have to do is charge $80,000 for every MP3 downloaded from the internet.

[...]
Thomas-Rasset was sued by the Recording Industry Association of America (RIAA) for pirating music. But unlike most of the more than 30,000 other targets of RIAA pirating lawsuits, Thomas-Rasset fought back. Her case was the first of its kind to go to trial. In 2007 she lost. A jury awarded $222,000 to the RIAA, but the judge threw out the verdict because he believed he gave incorrect instructions to the jury.

That led to a second trial. Thomas-Rasset lost again. This time the jury ordered her to pay a whopping $1.92 million, or $80,000 per song.

1.) The RIAA doesn't represent musicians, it represents the music industry that takes advantage of musicians. The music industry blew it years ago when they didn't understand the digital age and now they're desperate for a business model to make money, not art.
2.) An MP3 is a low-bandwidth representation of a song, not a 1:1 digital copy of the music.
3.) The 24 MP3s that were proven to have been in her share folder and then downloaded by a company that was legally authorized to download them.
Where's the crime?
4.) Ms. Thomas-Rasset is probably a liar and perjurer, but that's not what she's charged with.

So if the RIAA actually collects 1.92 MILLION DOLLARS for 24 songs that were uploaded by a Mom and then downloaded by an arm of the RIAA, where does the money go?

I've emailed the RIAA, I've called the RIAA, and I still can't get an answer. And I have a Gold Record certified by the RIAA.

It's been awhile since I worked in the biz in LA, but I still know a few artists, producers and engineers that had points on records and the ones I still have contact with have never received a dime or been informed that there was an RIAA settlement with $$ that they should be entitled to.

It seems the artists get screwed again. Welcome to the music industry.

I recommend if you want to buy music go out to your local clubs. If you like the band then buy their CD. It's cheaper than big labels, the band makes more than if they'd released on a major label, and actual music is performed. And there are lots of other ways to find music you like that don't involve the music industry and make the artist more money.

Corporations don't make art, artists do, and the artists deserved to get paid.

The RIAA (Recording Industry Association of America) was formed to ensure that standards were used in the manufacturing of vinyl records. This was necessary, because in the early days of records, RCA Victor's records might not sound good on a turntable & stereo built by Columbia. None of the competing standards was really better or worse, just different, so the RIAA didn't screw up, they just maintained order in a embryonic technology.

They also did the same when the new Phillips Compact Cassette™ was introduced in the mid '60s.

Since then, however, they seem to have nothing on their plate other than certifying Gold & Platinum album sales. Oh, and pursuing heavy-handed tactics against music downloaders.

In the late '70s, The Record Plant's Sausalito studio had t-shirts made that said "Tape a record, go to prison". While seemingly harsh, the sentiment was that taping albums and handing copies to friends was diluting artists' royalties. 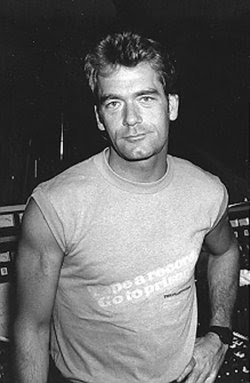 The same thing happens today with illegal downloading. And while some can justify it by the wealth of the artist "Dude, he's a bazillionaire, he won't miss it", that's not the point. Because while it shouldn't be necessary to explain, not all artists live in mansions in Beverly Hills. Many artists/bands record and distribute 2 or 3 albums before they make any profit.

Here's the simple explanation: If you're willing to work for free at your job, so the boss can have the fruits of your labor with nothing given back to you, then we can talk about downloading music for free. Until then, it's wrong.

Or how about this: the computer you're using for the downloads, it's really cool. I want it. I take it. How's that feel?
Posted by The Sailor at 10:45 AM