[...]
Past president Mike Leonard, a columnist for The Herald Times of Bloomington, Ind.: "As a Hoosier, I feel that she's done something that Dan Quayle could never do. Which was to make Dan Quayle look good. ... After the election, the video of Sarah and the poultry processing factory ... that pretty much says it all. The gift that keeps on giving."

Update: In an interview with ABC ... wait, what!? It's the media's fault but she keeps doing everything she can to extend her 15 minutes of infamy!? Anyhoo

As to whether another pursuit for national office, as when she joined Sen. John McCain, R-Ariz., in the race for the White House less than a year ago, would result in the same political blood sport, Palin said there was a difference between the White House and what she had experienced in Alaska. If she were in the White House, she said, the "department of law" would protect her from baseless ethical allegations.

"I think on a national level, your department of law there in the White House would look at some of the things that we've been charged with and automatically throw them out," she said.

I've seen comments on other sites that the reason Dems & some Repubs are 'attacking' Sarah (if by 'attacking her' they mean 'letting her talk') is that we're scared of her.

I have to admit I'm scared .... but for her not of her. I'm scared she won't make it to 2012 if someone doesn't put her on a respirator stat! She's too stupid to breathe.

And I disagree with her latest award, she's not a sitting duck, she's a turkey in a hopper. 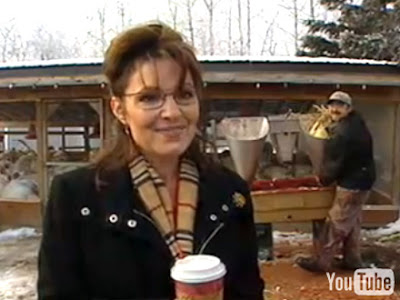 Cross posted at VidiotSpeak
Posted by The Sailor at 8:36 AM