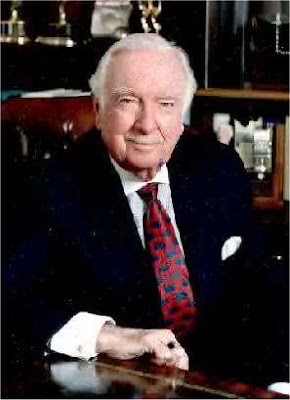 The most trusted man in America.

The passing of Walter Cronkite last week marked the end of an era in broadcast journalism. Cronkite was the epitome of the TV news anchor, and millions of Americans relied on him every evening to keep them abreast of events in his straightforward yet reassuring manner. It comes as no surprise that the last week has been filled with remembrances of Cronkite by a generation that grew up with his voice and image coming from their parents' TV sets night after night. I can offer few firsthand memories of Cronkite, as my father preferred to get his news from Chet Huntley and David Brinkley.

It seems today that my dad was the only man in America watching Huntley and Brinkley. Hard as it is to believe today, NBC's Huntley-Brinkley Report was actually the most-watched evening news broadcast for most of the period between 1956 and 1966, with CBS and Cronkite not taking the ratings lead until 1968, maintaining it until Cronkite's retirement in 1981. Cronkite earned his position as TV's most-trusted journalist. 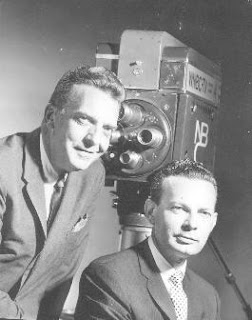 Huntley and Brinkley's newscast launched in the fall of 1956, replacing the venerable John Cameron Swayze. Swayze had been slipping in the ratings, and NBC executives hoped that a change in personalities would bolster viewership. NBC executives Ben Park and Bill McAndrew suggested teaming up Huntley and Brinkley, who had earned praise for their work at the 1956 political conventions. The network came up with the unique arrangement of basing Huntley in New York and Brinkley in Washington. Neither man cared much for this approach at first, as both were hoping to host their own program. Their producer, Reuven Frank, was also skeptical, but on the broadcast's first night he wrote the closing lines - "Goodnight, Chet." "Goodnight, David. And good night for NBC News." Huntley and Brinkley didn't care for this at first, either, but it became one of the era's most enduring catchphrases.

The rugged Westerner Huntley possessed an authoritative voice considered among the best in TV, and the witty, erudite Brinkley was an excellent foil. The Huntley-Brinkley Report got off to a slow start - ratings remained low at first, and President Eisenhower complained to NBC brass about the new pairing. Although the duo seldom saw each other in person, their chemistry was unmistakable, and by the end of 1958 theirs was the highest-rated news program on TV.

The Huntley-Brinkley Report also had the coolest theme music of any network news program:


In the early 60's Huntley and Brinkley were TV's most prominent journalists. As it often happens, their enhanced reputations led to accusations of editorializing the news, and their egos had become bigger than the stories they presented. Huntley was even once accused of editorializing by moving his eyebrows. Yet by this point they had gained a nightly audience of over 20 million viewers, and Frank Sinatra even sang a ditty about them. Ratings at rival CBS declined accordingly, and by 1962 the network deemed it necessary to replace their anchor Douglas Edwards, himself a legend of early broadcasting.

Walter Cronkite was a product of St. Joseph, Missouri, growing up in a Midwestern small-town environment where the neighbors sat on the front porch to discuss the day's events while the kids chased fireflies in the yard. While Huntley and Brinkley were the dedicated pros, Cronkite came across as the neighbor who kept up with everything in town, letting you in on the day's events. Despite his folksy demeanor, Cronkite had already compiled an impressive resume by the time he came to the anchor's desk. He began as a print reporter in 1935, and took his first broadcasting job with WKY in Oklahoma City the next year. He distinguished himself with his work in covering World War II for United Press, and joined the fledgling CBS TV news division in 1950. Over the next decade he stood out as one of the network's top political reporters, and also made a name for himself hosting the popular historical program You Are There. On April 16, 1962, he succeeded Edwards as host of The CBS Evening News.

The next year, Cronkite was praised for his respectful, dignified coverage of President Kennedy's assassination. Yet, as with Huntley and Brinkley, Cronkite was slow to gain an audience at first. Disappointed with his low ratings, CBS replaced Cronkite with Roger Mudd for their coverage of the 1964 conventions. In return, CBS received over 11,000 letters of protest from viewers asking that Cronkite be reinstated. Cronkite returned to convention coverage in 1968; more importantly, CBS discovered that their anchor had struck a deep chord with the American public. 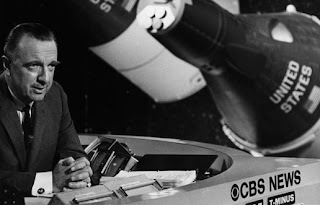 Cronkite's popularity continued to build, and by the mid-60's CBS was in a position to overtake NBC as the nation's top news network. Several factors led to CBS and Cronkite's ultimate preeminence. One key was the decision by RCA, NBC's parent corporation, to cut funding to its news division, leaving the better-funded CBS with the resources to produce higher-quality stories. America's fascination with space exploration in the 60's also contributed to CBS' rise. Cronkite had a keen interest in science and technology, and often approached the space missions with a boyish enthusiasm. Huntley and Brinkley, on the other hand, were little interested in the exploits of the astronauts. An AFTRA strike in 1967 also hurt the duo's reputation. Brinkley honored the pickets, but Huntley continued to work - he considered himself "a reporter, not a performer".

By the end of the decade, CBS was firmly established as the nation's #1 news network, and Walter Cronkite was well on his way to becoming a legend. More than any other news reporter ever had, Cronkite earned the trust of America with his genial, knowledgeable demeanor, and he became known for a catch-phrase of his own- "And that's the way it is." His voice was so respected that he could make world leaders sit up and take notice. Nowhere was this more apparent than in his coverage of the Vietnam War. His disapproving editorial following the Tet Offensive carried so much weight that it was a factor in Lyndon Johnson declining to seek re-election in 1968.

Huntley and Brinkley said goodnight one last time on February 16, 1970. Chet Huntley returned to his Montana ranch, and died of cancer in 1974. His early passing has made Huntley something of a forgotten man among the early TV journalism greats. David Brinkley is better remembered today, mostly for moving on to ABC in the early 80's and hosting This Week With David Brinkley, an opinion show that along with the rise of Peter Jennings, Sam Donaldson, and Ted Koppel finally put ABC News on a par with the other two networks. Walter Cronkite continued as CBS' main anchor until he retired in 1981, and he would continue to contribute to news specials for many years afterward, specializing in his passions of politics, science, and technology. Yet for all the major stories that Cronkite witnessed in his long, distinguished career, the one he wanted to be most remembered for was his role in bringing The Beatles to America. Sharon Cobb tells the story of Cronkite's role in this part of pop cultural history.

Times were different then. News reporters had the money to do their jobs properly. Coverage had yet to emphasize feelings over facts. News was not yet considered to be merely another form of entertainment. We may never see the likes of these men again. Chet Huntley and David Brinkley were masters of their craft. Walter Cronkite was the granddaddy of them all - more than just defining the role of the TV news anchor, he became for many, the voice of America. And that's the way it is.