'All hands on deck, we've run afloat!' I heard the captain cry 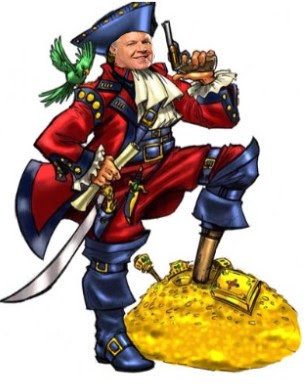 Everyone knows about the Somali Pirates that tried to capture an American ship, took the captain hostage, and were killed by Navy SEALS saving the captain's life.

An example of sensible use of US military power, to protect US citizens and property from foreign criminals?

Making sure the free market can safely export American-made goods?

Swatting down third-world thugs who haven't worked hard for their reward, as the American Dream demands?

RUSH: You know what we have learned about the Somali pirates, the merchant marine organizers that were wiped out at the order of Barack Obama, you know what we learned about them? They were teenagers. The Somali pirates, the merchant marine organizers who took a US merchant captain hostage for five days were inexperienced youths, the defense secretary, Roberts Gates, said yesterday, adding that the hijackers were between 17 and 19 years old. Now, just imagine the hue and cry had a Republican president ordered the shooting of black teenagers on the high seas. Greetings and welcome back, Rush Limbaugh, the Excellence in Broadcasting Network and the Limbaugh Institute for Advanced Conservative Studies.

They were kids. The story is out, I don't know if it's true or not, but apparently the hijackers, these kids, the merchant marine organizers, Muslim kids, were upset, they wanted to just give the captain back and head home because they were running out of food, they were running out of fuel, they were surrounded by all these US Navy ships, big ships, and they just wanted out of there. That's the story, but then when one of them put a gun to the back of the captain, Mr. Phillips, then bam, bam, bam. There you have it, and three teenagers shot on the high seas at the order of President Obama.

Emphasis mine. Not really much more to say, the stupid speaks for itself. So anxious to hate on Obama, Rush "Jabba The Hutt" Limbaugh spins like Nureyev to twist the story to make the murderous thugs on the open seas look good.

And this is the guy all Conservative politicians must bow down before and swear fealty to.

Works for me. Keep it coming, Rush. You do my party good.