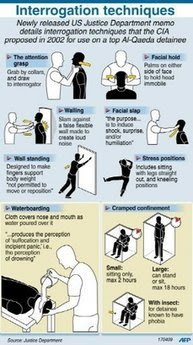 White House senior adviser David Axelrod says President Barack Obama spent about a month pondering whether to release Bush-era memos about CIA interrogation techniques, and considered it “a weighty decision.”
[...]
A former top official in the administration of President George W. Bush called the publication of the memos “unbelievable.”

“It's damaging because these are techniques that work, and by Obama's action today, we are telling the terrorists what they are,” the official said. “We have laid it all out for our enemies. This is totally unnecessary. … Publicizing the techniques does grave damage to our national security by ensuring they can never be used again — even in a ticking-time- bomb scenario where thousands or even millions of American lives are at stake."

I'll ignore the standard Politico method of giving anonymity to anyone who asks for it, (it's been covered), and go straight to the heart.

Those 'techniques' the Bush official was unwilling to lay claim to? Yeah, that would be torture, illegal by moral, US & International laws. And the 1st thing President Obama did in office was to outlaw those methods.

Now back to Bushworld "It's damaging because these are techniques that work, and by Obama's action today, we are telling the terrorists what they are" - actually the torture methods have been proven not to work. They weren't designed to elicit information, they were designed to elicit false confessions.

And, point of fact, the methods have already been published, (raise your hand if you've heard of 'waterboarding?'), just not the memos that authorized the torture. And what Obama was signifying to the world was that we have begun to climb out of the immoral & illegal abyss that 8 years of Bush & Co sunk us in.

More from the NYT:

[...]
Together, the four memos give an extraordinarily detailed account of the C.I.A.'s methods and the Justice Department's long struggle, in the face of graphic descriptions of brutal tactics, to square them with international and domestic law. Passages describing forced nudity, the slamming of detainees into walls, prolonged sleep deprivation and the dousing of detainees with water as cold as 41 degrees alternate with elaborate legal arguments concerning the international Convention Against Torture.
[...]
In the memos, the Justice Department authors emphasized precautions the C.I.A. proposed to take, including monitoring by medical personnel, and the urgency of getting information to stop terrorist attacks. They recounted the C.I.A.'s assertions of the effectiveness of the techniques but noted that interrogators could not always tell a prisoner who was withholding information from one who had no more information to offer.

The memos include what in effect are lengthy excerpts from the agency's interrogation manual, laying out with precision how each method was to be used. Waterboarding, for example, involved strapping a prisoner to a gurney inclined at an angle of "10 to 15 degrees" and pouring water over a cloth covering his nose and mouth "from a height of approximately 6 to 18 inches" for no more than 40 seconds at a time.

But a footnote to a 2005 memo made it clear that the rules were not always followed. Waterboarding was used "with far greater frequency than initially indicated" and with "large volumes of water" rather than the small quantities in the rules, one memo says, citing a 2004 report by the C.I.A.'s inspector general.

C.I.A. interrogators used waterboarding, the near-drowning technique that top Obama administration officials have described as illegal torture, 266 times on two key prisoners from Al Qaeda, far more than had been previously reported.
[...]
A former C.I.A. officer, John Kiriakou, told ABC News and other news media organizations in 2007 that Abu Zubaydah had undergone waterboarding for only 35 seconds before agreeing to tell everything he knew.

The 2005 memo also says that the C.I.A. used waterboarding 183 times in March 2003 against Khalid Shaikh Mohammed, the self-described planner of the Sept. 11, 2001, terrorist attacks.

Wow, either waterboarding doesn't work or these guys really like their job!

One is too much. Waterboarding is torture, period. I can ensure you that once enough physical pain is inflicted on someone, they will tell that interrogator whatever they think they want to hear. And most importantly, it serves as a great propaganda tool for those who recruit people to fight against us.

p.p.s. Digby says it better than I can.

Cross posted at VidiotSpeak
Posted by The Sailor at 5:15 PM