You're once, twice, three times an a-hole 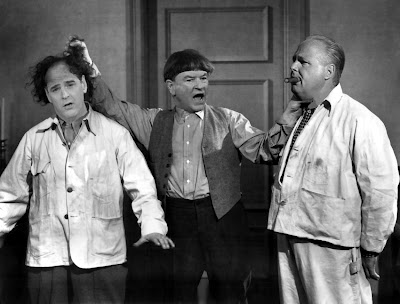 Casting for New Three Stooges Movie Complete
In a press release dated April 1, 2009, MGM has announced that its plan to make a new full length Three Stooges movie took another step forward by signing the three main lead characters to play Moe, Larry and Curly.
Earlier reports that had Jim Carrey, Sean Penn and Benicio Del Toro set to play the Stooges proved to be untrue, as the producers decided instead to focus on bringing in a trio of much funnier individuals ... Sean Hannity, Bill O'Reilly and Rush Limbaugh. The right-wing talk show hosts caught the attention of the directors, the Farrelly Brothers, who heard their programs on the radio and felt they would be perfect Stooges. "They were naturals when it came to humor", said one of the brothers. "The things that spill out of their mouth is unintentionally hilarious, the best kind of comedy".
When asked what kind of script had been prepared for the upcoming film they laughed "Are you kidding? Who needs a script. We just let them loose talking about their views and opinions and what they try to pass off as facts and truth. We almost pissed our pants over some of the crap they came up with".
The movie is set to start filming this fall with a planned 2010 release.