And empty clothes that drape and fall on empty chairs 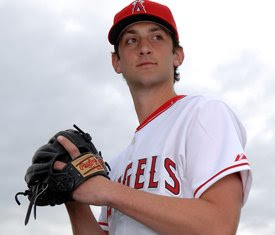 Last night a young life was lost senselessly when Los Angeles Angel rookie pitcher Nick Adenhart, along with two others in the car he was inside, were struck and killed by a drunk driver. As often seems to be the case, the drunk driver was a repeat offender driving on a suspended license.
This isn't a sports blog, but I know Pam is also a big Angels fan, so I just wanted to put up a mention of Nick's needless passing as a reminder of how precious, and sometimes fleeting, life is.
As Nick's teammate, Torii Hunter, noted, "A lot of these guys in here have never lost anybody in their family that's close to them. I hate that this happened, but this is part of life. This is the real deal. That's why you've got to kiss your kids, kiss your family every day when you get up in the morning and before you leave for work."
Just hours before he had pitched six scoreless innings. In a prepared statement, Nick's parents said "He lived his dream."
A small but steady stream of somber fans came to the stadium Thursday to add flowers to a makeshift memorial on the pitcher's mound on the brick "infield" outside the stadium entrance.
A poster among the bouquets read, "No. 34, You are one more Angel in heaven." Scribbled on a baseball was, "Now you play for another Angels team."