Can't decide on which way to go

Regarding the awfulness that is Lieberman, I re-tweeted something from Katrina VanDen Heuvel of The Nation magazine today, and it automatically posted over to my Facebook account: 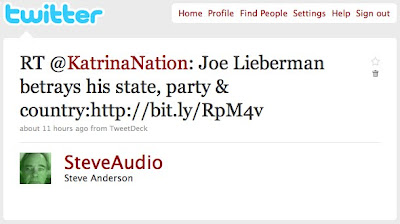 I got an interesting response from an old friend, a great guy, who tends toward the conservative:

The Dems dictating that those who do not wish to pay for health insurance pay for those who can not afford it or are not able to get off their intoxicants or asses long enough to get strait and pay for it themselves is the very definition of dictatorship! I feel for those less fortunate, and I do my share when I can, but why can't the Gov. simply supply health care to those less fortunate, why do we all have to be subject to Federal rules and dictates?

While I understand the point, here's the error in logic:

In a democratic republic, we all have responsibilities about which we sometimes disagree. For example, I was opposed to the Iraq Invasion from the beginning. It clearly had nothing to do with 9/11, yet was pumped into the publics' awareness as the War of Necessity. In a perfect workd, I could withhold the percentage of my taxes that went to the war effort.

And I would have likely been audited by the IRS, and maybe sent to Federal prison.
I would like to withhold my share of taxes that goes toward corn ethanol subsidies, since it's a total waste of time, but again, that's the price I pay for the benefits the government provides that I do use and believe in.
But there's a schizophrenia in my friend's answer. He doesn't want to pay for:

Yet follows up with:

why can't the Gov. simply supply health care to those less fortunate?

Yes, well, that's exactly what we're trying to do here. The Federal and State governments already do this. It's called Medicaid by the Feds, MediCal here in CA. The beef with helping out the willing underinsured is a straw man, far more people who are employable go without insurance than addicts or willful indigents.
And the final question:

why do we all have to be subject to Federal rules and dictates?

Because we live in a country with a federal government. That does stuff. Like distribute H1N1 vaccine, build interstate highways, provide postal service, and defends us from enemies.
Here's the real issue: The larger the risk pool, the lower the costs. The for-profit insurance blood-suckers understand this, yet against their own interests do not implement any internal reform.
Now they're thrilled by parts of the proposed HCR legislation that would mandate coverage, since that brings in more customers and premiums. To them, that simply means more profits, since they will not expand coverage like the Public Option would.
If you're a fiscal conservative, HCR with a strong public option lowers costs. The CBO proves this.
If you're a bleeding-heart liberal, providing universal health care is a moral imperative.
If you're a free-market capitalist, HCR means more healthy workers doing productive jobs.
If you're a Randian Libertarian, well, you're an idealogue, not willing to entertain something that benefits the common good.
Thankfully there aren't many Randians in positions of power these days.
And finally, in re: Lieberman, here's what he said in 2006:

"What I’m saying to the people of Connecticut, I can do more for you and your families to get something done to make health care affordable, to get universal health insurance," Lieberman said during a July, 2006, debate.

During that campaign, Lieberman advocated "small business health insurance reform, plus something I call MediKids to cover all the children in America on a sliding fee basis up until the age of 25."

Lieberman also pushed for a plan he called "MediChoice," which would "allow anybody in our country to buy into a national insurance pool like the health insurance pool that we federal employees and Members of Congress have."

Lieberman promised his reforms would cover "95 percent of those who are not covered now, and it will reduce the pressure on rising costs for all the millions of others."

As Eric Kleefeld pointed out at TalkingPointsMemo, Lieberman had a similar platform in 2004, when he promised to cover all American children with a Medicare-style plan, and said under his plan "if you lose your job, you will not lose your health insurance."

And that why progressives are so mad at Lieberman. His current statements in re: HCR seem more like a calculated appeal to obstructionist Republicans than an honest yet divergent opinion.

In other words, craven political posturing.

Lastly, where was the conservative outrage when GWBush was waging war in Iraq & Afghanistan with no intention of paying for it, while giving tax breaks to Donald Trump and other multimillionaires, raising the national debt to astronomical heights.