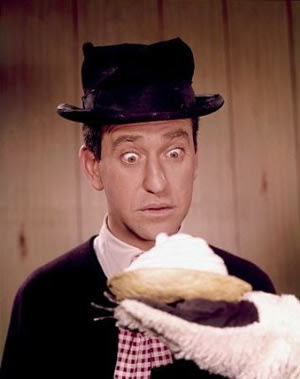 Pie-throwing master Soupy Sales, whose madcap antics won the hearts of both young and old, passed away Thursday at age 83.

Sales was born Milton Supman on January 8, 1926, in Franklinton, North Carolina. His parents owned a dry goods store, and the Supmans were the only Jewish family in town. Young Milton picked up the nickname "Soup Bone", in reference to his last name, which he adapted to "Soupy" when he became a professional comedian.

Graduating from high school in 1944, Soupy enlisted in the Navy and served in the South Pacific during World War II. He entertained his shipmates with practical jokes and with crazy characters that he would often broadcast over the ship's PA system. He invented a large dog, "White Fang", that would play outrageous jokes on the seamen. After the war, he enrolled at Marshall University, graduating with a journalism degree. Soupy then moved to Cincinnati, working as a DJ and performing in nightclubs using the name Soupy Hines. He landed his first TV job at WKRC, where the station manager suggested he change his stage name to Soupy Sales, after the 1920's comic Chick Sale.

Sales rose to stardom in the mid-50's while working at WXYZ in Detroit. His Lunch With Soupy Sales, although intended to be a childrens' program, also attracted a sizable number of adults with its rapid-fire slapstick humor. He developed a series of routines using puppets, including White Fang from his Navy days, Black Tooth, and Pookie the Lion. His comic routines were often climaxed by somebody, often Sales himself, getting a pie in the face. Lunch With Soupy became enormously popular in Detroit, and in 1959 was picked up for national broadcast by ABC. During his time in Detroit, he also hosted a nighttime program, Soupy's On. A noted jazz aficionado, Sales used this program to promote many of the leading jazz artists of the era.

Sales moved his program to Los Angeles in 1960, and in 1964 began a run at WNEW-TV in New York City. Soupy was at the height of his fame during his years in the Big Apple. The Soupy Sales Show was syndicated throughout the country, and White Fang, Black Tooth, Pookie, along with private detective Philo Kvetch, Hobart and Reba whose heads poked out of the pot-bellied stove, and other Sales characters became etched in the national consciousness. As in Detroit, he often featured jazz and pop music on his programs, often coming up with madcap dances. One of his dance inventions, "The Mouse", became something of a national fad.

Soupy's most infamous moment occurred on New Years Day 1965. Angry at being made to work the holiday, Sales instructed his young audience to sneak into their parents' bedrooms and remove those "funny green pieces of paper with pictures of U.S. Presidents" from their pants and pocketbooks. "Put them in an envelope and mail them to me," Sales told his young viewers. Several days later, Soupy began receiving envelopes containing money from kids all over the country. The uproar from enraged parents led to WNEW suspending Sales for two weeks. Soupy apologized, explaining that most of what he had received was Monopoly money, and donated the remaining cash to charity. He was sometimes accused of sneaking dirty jokes into his shows. Soupy had a standing offer he would pay $10,000 to anyone who could prove he used obscenity on his childrens' programs; no one ever took up the offer. Antics like this, though, helped to win Sales an unlikely cult audience among college students, who saw his anarchic comic routines as a subversive challenge to authority.

The pie in the face was Soupy's trademark. Sales estimated that he had over 25,000 pies thrown at him in the course of his career. There was a science to successful pie-throwing, as Sales recalled in his memoir Soupy Sez: “You can use whipped cream, egg whites or shaving cream, but shaving cream is much better because it doesn’t spoil. And no tin plates. The secret is you just can’t push it and shove it in somebody’s face. It has to be done with a pie that has a lot of crust so that it breaks up into a thousand pieces when it hits you.” One day, though, Soupy was notably caught off-guard: “One of my younger fans made the mistake of heaving a frozen pie at me before it defrosted. It caught me in the neck and I dropped like a pile of bricks.”

After Sales' program went off the air, he stayed in the public eye by appearing on a number of game shows, including What's My Line?, To Tell The Truth, The Hollywood Squares, and The $10,000 Pyramid. He continued to host local TV and radio programs in New York, and did occasional movie work. He also fathered two sons, Hunt and Tony, who became rock musicians, best known for their band Tin Machine and working with David Bowie and Iggy Pop.

Soupy Sales was a one-of-a-kind talent; zany, madcap, sometimes infuriating, but you couldn't help but like him. Enjoy this fine tribute to the master of the pie in the face.

Hello, i think that i saw you visited my web site thus i came to
return the desire?.I'm trying to find issues to enhance
my site!I suppose its ok to use a few of your concepts!!