how stupid could I be, a simpleton could see 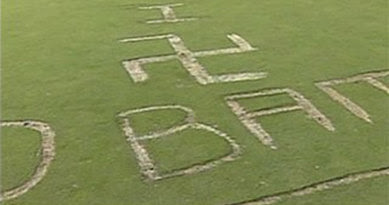 Police along with the Secret Service are investigating after a local country club discovered a symbol that represents eastern religious beliefs carved into the green.

Police believe the vandals meant to carve a swastika next to President Barack Obama's name on the 18th hole; however, the symbol was backwards and means hope and peace in some Eastern countries.

The comforting thing is that these morons can't even get a swastika straight. The uncomfortable thing is that it doesn't take much brain power to pull a trigger.

And speaking of stupid ...

Four Republican lawmakers have accused the most prominent Islamic advocacy group in Washington of trying to plant "spies" as interns on Capitol Hill.
[...]
In an unusual announcement this morning, four conservative Republicans — Reps. John Shadegg (Ariz.), Paul Broun (Ga.), Trent Franks (Ariz.) and Sue Myrick (N.C.) — formally asked the House Sergeant at Arms to launch an investigation of the Center for American-Islamic Relations. They accused CAIR, a non profit group, of trying to infiltrate Capitol Hill with interns and staffers.

Shadegg said Wednesday that CAIR is an organization that “members of Congress should be aware of and that should be investigated by the Justice Department and Internal Revenue Service.”
[...]
The proclamation from the four Republicans came in advance of a book, entitled "Muslim Mafia: Inside the Secret Underworld that's Conspiring to Islamize America," which includes a forward by Myrick. The author of the book, Dave Gaubatz, an anti-Islam activist who wrote last year that “a vote for Hussein Obama is a vote for Sharia Law.”
[...]
The lawmakers also released a one page "strategy" document they said they obtained from CAIR. But the document basically lays out a fairly straight forward public relations and lobbying strategy and indeed, one of the goals is "placing Muslim interns in congressional offices" and registering people to vote.

But, but, blacks! and Muslims! and Mexicans! Geebus, they really got nuthin' except flinging poo and hope something sticks.

America has always been a melting pot of cultures, religions and races (BTW, I don't even know what a race is.) We're all Americans and we deserve to be represented by our elected offals [sic].

Next up in the stupidity competition:

A federal judge challenged the backers of California's voter-enacted ban on same-sex marriage Wednesday to explain how allowing gay couples to wed threatens conventional unions, a demand that prompted their lawyer to acknowledge he did not know.

[raises hand] I know, I know, ooh, teacher call on me I got the answer!
It doesn't. The only possible reason they could have is the christain bible, and that's against the Constitution of the US and CA.

Now for some brain bleach: