I'll stand by you

I blogged in June about client & friend Jeff Castelaz and his wife Jo Ann, who lost their beautiful 6 year old son Pablo to cancer. They had already started the Pablove Foundation, not to help themselves, but to raise awareness and money for other victims of pediatric cancer. Read the Mission Statement at the above link, it will bring tears to your eyes and fire to your heart. 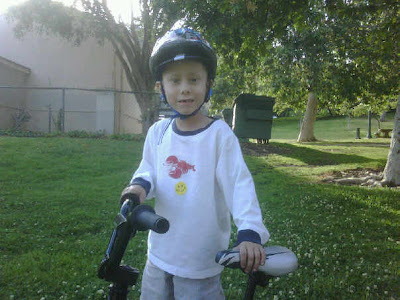 (Pablo, a few weeks before his passing)
An avid cyclist, and friend of Lance Armstrong, Jeff decided to turn his sorrow and rage toward the positive, and organized Pablove Across America:

On October 10, 2009, Pablo’s dad, Jeff Castelaz, along with his cycling coach, Rick Babington, will embark on a 3,100 mile ride spanning the entire US. They will start in St. Augustine, FL and in the course of 30 days on their bikes, make their way to Pablo’s grave at Forest Lawn Hollywood Hills in Los Angeles.

Pablove Across America is Jeff’s show of commitment to fighting kids’ cancer—and his need to wring out his soul of its sadness. Along the way, he’ll visit children’s hospitals to connect with cancer kids just like Pablo. He’ll promote cancer awareness on radio, television and in the written press. Anything to drive home the mission of the Pablove Foundation, and to keep Pablo’s spirit and boundless energy alive.

Pablove Across America is about standing up, hammering the pedals, speaking out and FIGHTING back—to raise awareness that kids get cancer, families need help and hope—hope not only to find a cure, but in the day-to-day grind of treatment.

The ride has many corporate sponsers. Here's the video of Jeff & Lance announcing Pablove Across America:

The ride just finished Day 12. Read the blog posts about it at pablove.org/news, especially the daily dedications, like this one:

Baby Luke Piersol is our dedication tonight. He was a brave little boy who Jo Ann, Pablo, Grady and I got to know well in our time at Childrens Hospital Los Angeles. Luke was 16 months old when he passed away on February 1, 2009. His parents Laura and John and sister Grace fought their fight in the same rooms and hallways as us, and we got to know them very well.

Tonight’s dedication goes out to Josh Brestel of Lincoln, Nebraska. He passed away at four years old after two relapses and, in his mom’s words, “too many surgeries to count.” We send our intentions for peace and tranquility to Josh’s family and friends all over the world.

The Castelaz family is working tirelessly to try and help not themselves, but other families and kids who have to fight pediatric cancer. Even in these tough economic times, this is a cause that needs support. They're working hard in hopes that the personal loss and hell they went through won't happen to anyone else.

Remember, as you sit comfortably in your home, that it's always someone else's problem.

Until it happens to you.

Here's the ride itinerary: pablove.org/itinerary
Posted by SteveAudio at 12:29 AM