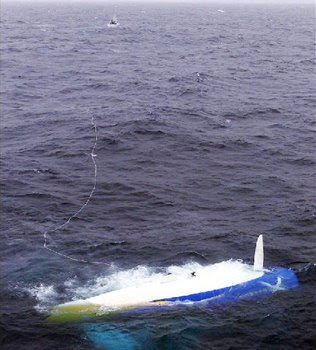 This is just sad:

ONE of two men who survived a fatal boat capsize off the New South Wales north coast has told a Sydney court how the ship sent to rescue them "creamed" them by going straight over their heads.

On its way from Queensland's Whitsundays to Sydney in September 2002, Excalibur hit rough seas off Seal Rocks. The crew tried to change the sails and head back towards Port Stephens, but the keel split and the vessel overturned, tossing all six crew members into chilly waters.

I don't blame the cargo ship trying to rescue them, I sure don't blame the sailors, and I don't even fault the boat builders. Racing boats like this are always on the bleeding edge of technology.
**********************
Posting the 1st Amendment on your business is now illegal in Clearwater Florida:

[...]
The federal lawsuit alleges that Clearwater is trampling on the shop’s First Amendment rights. City officials say the fish painting amounts to an unauthorized sign under Clearwater’s laws. They have fined the store nearly $700 and ordered it to paint over the mural.

But Herb Quintero, owner of The Complete Angler at 705 N Fort Harrison Ave., insists the mural is art, not a sign. Last month, in response to a city deadline to remove the mural, he covered it with a banner displaying the text of the First Amendment.

City officials said the mural violated an ordinance that bars businesses from depicting what they sell.

The city recently cited the store again for the mural and the banner.

Not only is Clearwater Farked, they actually have an ordinance that bars businesses from depicting what they sell? WTF!

The most amusing thing to me was the comments of all the folks saying they don't like the ACLU, but in this case the ACLU is doing the right thing. Gee, the ACLU fights for free speech. Jus' som' folks don't like it when it ain't their speech.
*********************
And speaking of Florida:

City official: Destin police will have to inspect for nude dancing before making a bust

Although the Oasis on Mountain Drive has admitted to nude dancing on the premises -- something that breaks Destin rules -- the city must catch them in the act before taking action, City Manager Greg Kisela says.

"It sounds strange to say we have to observe it ourselves, but that's our plan," Kisela said. "We're going to go in and do some inspections; if we observe that, that may be one of the steps" we take.

I don't know whether the headline was unintentional or snarky, but either way; it's nice work if you can get it.

(All entries via Fark)

Cross posted at VidiotSpeak
Posted by The Sailor at 3:00 PM

Email ThisBlogThis!Share to TwitterShare to FacebookShare to Pinterest
Labels: Hits and Runs