Doing a little fair use of Mark Jordan's special to the Memphis Commercial Appeal for you Los Angelinos:

Home Sweet Home (Sunbeam Records, ) is the one and only solo album by legendary Stax and Ardent studios engineer Terry Manning. The record features the first recording appearance of Memphis guitarist Chris Bell. A few years later Bell would form Big Star, a band whose fate would follow that Manning record. Critically well-received upon its release, Home Sweet Home's sales suffered from the endemic distribution problems that ultimately led to Stax's demise (ironic in a city that would become the distribution capital of the world).
. . . .
Manning [is] currently manager of Chris Blackwell's Compass Point Studios in the Bahamas[.]
. . . .
Also originally released on Enterprise, Memphis blues rock band Moloch's eponymous LP (Fallout Records, ), released here with a pair of bonus tracks, is today revered as one of the most complete documents of the guitar prowess of the late Lee Baker.

Moloch -- Baker, drummer Phillip Durham, bassist Steve Spear, organist Fred Nicholson and vocalist Gene Wilkins -- was a lynchpin of the Memphis psychedelic scene of the late '60s, sort of a bluesier Grateful Dead with Midtown substituting for the Haight. Their one and only album was produced by Don Nix (the Mar-Keys, Leon Russell), who also wrote most of the songs on it. Wilkins and Baker are the stars of the effort, however, with the latter giving a pointed schooling in the essentials of blues-rock guitar on tracks such as the original recorded version of the standard "Going Down."

Following the demise of Moloch the following year, Baker would go on to a storied career backing up Furry Lewis and Alex Chilton and forming the groups Mudboy & the Neutrons and the Agitators. Unfortunately, his career was cut short when he was murdered in 1996, but with this first CD reissue of Moloch, his legacy perseveres.

The bonus tracks are both sides of a 45 recorded later. Here's the album cover missing from the article, and the back side too, courtesy of an Amazon.com user: 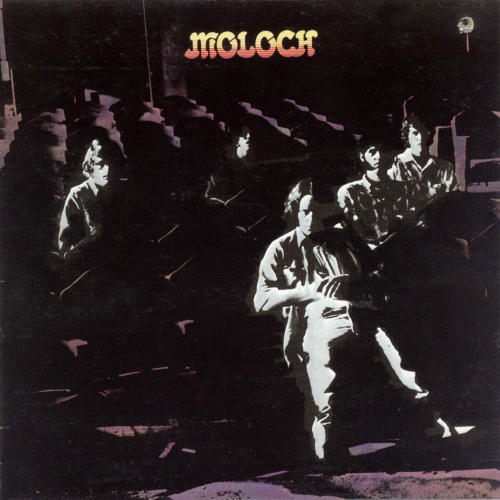 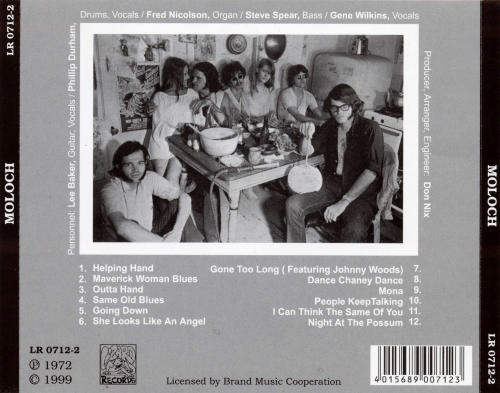 I think the front cover is from a scan I submitted to allmusic.com some time ago, because you can see the cutout punch in the upper right-hand corner that existed in the promotional copy I had.

I road-managed and lived with these guys for a couple of years circa 1971-72, and played some hand percussion and wrote a couple of songs for them later on. Don Nix produced and wrote all the songs on the album.

Click these links for music samples of: All tracks on the re-released Moloch album; AMG's picks off the album; Lee Baker singing on the original recording of "Going Down" (since covered many times); and drummer Phillip Dale Durham's amazing original vocal on "Same Old Blues" that freaked Freddie King out so badly that he had to record the song himself. (Cross-posted at The Daily Docket.)
Posted by Anonymous at 9:41 AM