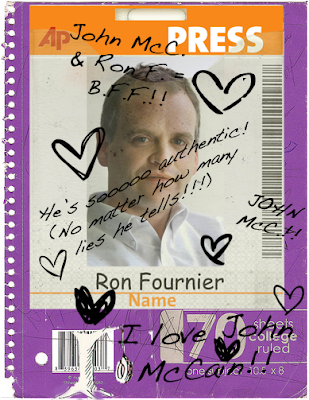 The picks say something profound about Obama: For all his self-confidence, the 47-year-old Illinois senator worried that he couldn't beat Republican John McCain without help from a seasoned politician willing to attack. The Biden pick is the next logistical step in an Obama campaign that has become more negative — a strategic decision that may be necessary but threatens to run counter to his image.

Well, this generated a lot of heat and criticism in the intertubes. MoveOn.org and our friends at Firedoglake organized letter writing campaigns to call for Fournier's dismissal. After all, this is the guy who exchanged chummy emails with Karl Rove, and tried to get a gig working on theMcCain campaign.

Here he is tonight, spitting reflecting on Hillary Clinton’s speech to the Democratic convention:

Clinton had to somehow convince people that she honestly thought Obama was ready for the presidency. But something stood in her way: Her words.

– Dec. 3, 2007: “So you decide which makes more sense: Entrust our country to someone who is ready on Day One … or to put America in the hands of someone with little national or international experience, who started running for president the day he arrived in the U.S. Senate.”

I know, I know — you’re shocked that a now-famed McCainiac like Fournier found a way to work some out-of-context “praise” for John McCain in reporting on a speech that focused on all the things Clinton and Barack Obama are for, but McCain is against (as Hillary herself repeatedly pointed out during the primaries, even as she competed against Obama).

Read the rest. This guy is taking the already compromised AP toward the rarified heights of Pravda.

In a “news” story. For the once-famously objective Associated Press.

But if Fournier has to take them down to along the way, he will. After all, he’s got a candidate to get elected.

Bastard. Fournier, that is, not Swopa. But you already knew that. Sorry.
Posted by SteveAudio at 12:00 AM