The next thing you know boy, Well, you're prison bound 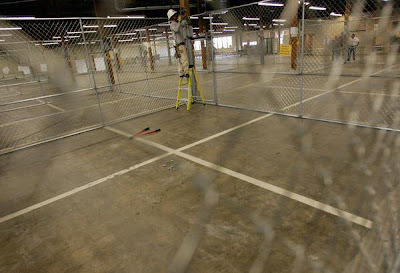 (Photos by Nathan W. Armes, Special to The Denver Post )
Denver police are ready to haul away protesters to temporary cages:

Work crews were covering the makeshift holding pens that could house protesters who run afoul of the law at next week's Democratic National Convention with chain-link fence Wednesday.

City officials had originally topped the fences around the holding areas with razor wire to keep those arrested from climbing out, but reconsidered because of community concerns, said Denver County Undersheriff Bill Lovinger.

The temporary arrestee-processing center, which is housed in a warehouse near Steele Street and East 38th Avenue, will be open for a week starting Sunday.

The building was once used to store the city's voting machines.

Somehow fitting, that last sentence. The criteria for being detained are pretty vague, and include:

Police are distributing a pamphlet reminding protesters of where they have a right to demonstrate but also warning them they can be arrested if they refuse a lawful order to disperse, even if they aren't breaking any laws.

Makes me proud to be an American.

But I'll bet a dinner at your favorite restaurant that no one from this group will be detained:

DENVER, Aug. 22 /Christian Newswire/ -- Randall Terry States: "A group of pro-life activists will get arrested – perhaps more than once – in order to draw focus to Obama's hard core support of child-killing. We will definitely be arrested on Tuesday, August 26 at a location to be announced - and perhaps sooner.

"We intend to be "Party Crashers" to disrupt a number of DNC events, including, but not limited to: the Interfaith Gathering; Opening Reception; African American Caucus; Hispanic Caucus; Women's Caucus; Faith Forum; the Opening of the DNC; and more.

"We are taking our cues from the 'Letter from the Birmingham Jail' by Martin Luther King Jr. We are deliberately creating social tension in order to highlight the grave evil of legalized child-killing. Those who condemn our tactics might forgo celebrating Marin Luther King day."

The obvious hypocrisy is that the movement Right hates ML King. Except when they can try to co-opt his 'civil disobediance' to further their point. And they hate Catholics, except when they can quote a Pope as being anti-abortion.

And they have no interest in helping any of their "saved babies" grow to a happy and prosperous adulthood.

And they have no interest in helping any of their "saved babies" not get killed in John McCain's 100 Years War.

But it gets worse. In a pamphlet called "Real Solutions For The Negro Problem" we find this: 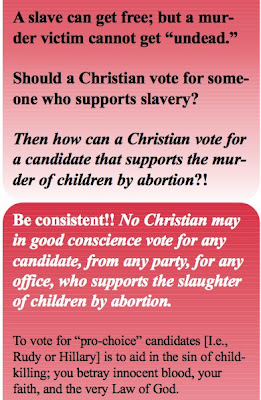 Nothing really matters. Not war, famine, pestilence. Not the health of human beings, or the loss of real live families. Just the loss of small clumps of tissue that may or may not become persons.

In re: the title, here's Leadbelly singing "Midnight Special":