For the average guitar player, awareness of the players who did studio work, you know, movie/TV scores and record dates, grew in the mid '70s. We wanted to know who played the Rockford Files theme, or the solo on the latest Steely Dan record.

FYI, the almost legendary cut "Peg" does indeed have 6 solos on the master 2" tape, played by various session players, as Becker & Fagen searched for exactly the right one. The last, by Jay Graydon, is the one that made the album. But I have heard all the others, as I set up the room at Capitol for Elliot Scheiner to mix the 5.1 version of "Aja" and "Gaucho". 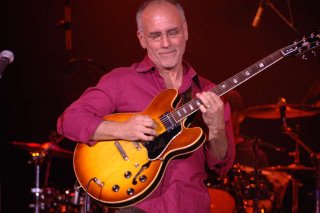 Larry Carlton emerged as an early guitar hero in this context with his signature Gibson ES-335. Young, handsome, friendly and likable, and a wonderful player, he became an icon for many guitarists in the late '70s as the ideal fusing of pop, rock, and jazz ideas. And the growing awareness of the session world helped motivate many young players into learning music theory, rather than buying into the idea that "reading music would stifle them." Clearly, nothing stifled Larry's playing, except for an almost unimaginable tragedy he was able to overcome.