If you ever change your mind 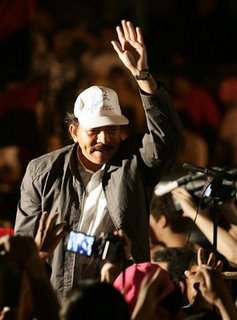 So Daniel Ortega is President of Nicaragua again. And I guess all that Iran/Contra stuff is just water under the bridge:

The United States and his rivals worry the Sandinista revolutionary in him will resurface, as Venezuelan President Hugo Chavez and Cuban leader Fidel Castro welcome him into a club of leftist leaders fighting American dominance in the region.

But Ortega, who was president in 1985-90, the height of the Contra insurgency, says he has traded war for peace, love and consensus.

His victory speech late Wednesday was tinged with some of his old fire. Raising his arms in victory, he led thousands in a rendition of an old revolutionary song: "The people united will never be divided."

He promoted socialist ideals such as free education and medical care, lambasted U.S. Republicans for the war in Iraq and thanked other leftist Latin American leaders for their support. But most of his speech was dedicated to praising democracy and reaching out to opponents.

"Don't let one criticism slip from your lips against those who didn't vote for us," he warned his supporters. "We have to be humble."

And of course, free education and medical care are socialist ideas, which could never be adopted, or even become popular in the US of A. And he criticised the Iraq invasion, which makes him seriously unhinged.

Who writes this crap?

And remember this part about Iran Contra:

The plan went ahead, and proceeds from the arms sales went to the Contras, a group engaged in an insurgency against the democratically elected leftist Sandinista government of Nicaragua. The diversion was coordinated by Oliver North of the National Security Council. Supporting the Contras financially was an effort to assist them in their fight against the Nicaraguan government.

Both the sale of weapons to Iran and the funding of the Contras attempted to circumvent stated Administration policy and legislation passed by Congress, known as the "Boland Amendment," enacted over concerns of widespread human rights abuses by the Contras.[15] Administration officials argued that regardless of the Congress restricting the funds for the Contras, or any affair, the President (the administration) could carry on by seeking alternative means of funding such as private entities and foreign governments.[16]

Yep, that Ollie North, who should be languishing in prison rather than on Right-Wing talk radio.