What in the world's come over you

Conventional wisdom says that Schwartzenegger has rehabilitated himself, that he's really a social moderate and not a hard-ass Republican.

Well, rubes, you been had. He's nothing more or less than a he-man has-been. 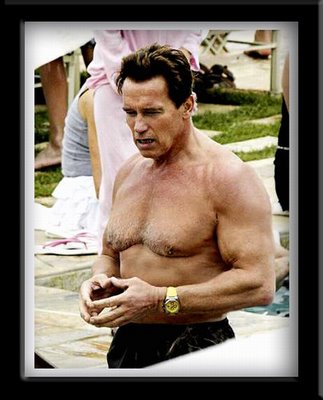 We've got it all from him:

In the last two days of reported contributions, we find several of the usual suspects, belatedly giving the maximum of $22,300 to Arnold's campaign. It's in their corporate interest to go with the winner. But who's this humble self-described housewife, Paulette Delgado, also forking over $22,300?

It takes a little digging, but a cross-check of addresses indicates she's Paulette Delgado Matich, wife of Stephen Matich, president of the family-owned Matich construction and development corporation. It's one of the companies that stands to profit handsomely from the governor's multi-billion-dollar package of transportation, water and housing bonds on Tuesday's ballot. Arnold also named Mr. Matich this year to the state Contractor's License Board.

The special interest cash keeps rolling in to Arnold's campaign committees... He has now taken $103,994,221, which is part of the reason more than half of Californians believe, according to Wednesday's Field Poll, that the Gov has not reduced special interest influence in the Capitol. Remember this Arnold quote from his Recall campaign?

"Any of those kinds of real big, powerful special interests, if you take money from them, you owe them something."

Millions of entertainment industry dollars are flowing in from Hollywood ($6 million total and over $150K in the last two weeks), and the financial industry ($12.5 million), and the construction, real estate & development industries (over $16 million combined) continue to lavish Arnold with cash. No doubt they all want the Gov to lavish them with fat infrastructure bond contracts in return for their political investment.

And, as if the almost $104 million in special interest money that Arnold has acknowledged accepting wasn't enough, the LA Times and Sacramento Bee report that there is still more corporate cash coming in under the radar through the Gov's affiliated nonprofit groups.

(State Senator Sheila Kuehl:) The reasoning behind the Governor’s opposition to universal health care is truly innacurate, which is no surprise considering he has refused to meet to discuss the issue. If the Governor took a thoughtful look at SB 840 he would see that delivery of health care would remain exactly as it now is, public or private. The main difference is that under SB 840 every Californian would have been able to choose their own doctors and hospitals and there would have been no unreimbursed care.

The Office of the Governor issued a statement detailing the Governor’s planned veto. Schwarzenegger becomes the first Governor in American history to veto equal rights legislation that would have granted marriage equality to same-sex couples.

In March of 2004, Governor Schwarzenegger promised Californians that he would enact legislation granting marriage equality to same-sex couples if it was passed by the California legislature.

One of these contributors, according to an investigation conducted by the FTCR is Roland Arnall, co-chair of the board at Ameriquest Capital Corporation, a company that is being investigated for a range of corporate crimes from fraud to bait-and-switch sales tactics in 25 states. Arnall and his company, says FTCR, have alone given over $1.2 million.

For now, California law enforcement officials are still deciding whether or not to investigate Arnall and Ameriquest "for predatory lending practices." Ameriquest also donated $250,000 to President Bush's inaugural celebrations fund.

Another major individual contributor to Arnold's campaign is real estate and development mogul, David Murdock, who is owner of Castle & Cook and CEO of Dole Foods. Together, Murdock and his companies have handed over $352,000 to the governor hoping to get him to block changes to state property tax rules that would require corporate landowners to pay their fair share of property taxes.

Consumer advocates estimate that closing such corporate property tax loopholes could add an estimated $5 billion to a state treasury overburdened by deficits.

Meanwhile, supporters of Proposition 89, the campaign-finance initiative on the November ballot, attempted to capitalize on the situation by purchasing advertising time during the show. They have produced a 30-second ad that suggests that Schwarzenegger broke his promise to clean out special interests from Sacramento, and scheduled it to run in Monterey, Los Angeles, San Diego, Palm Springs and Santa Barbara during the show.

Schwarzenegger is setting two dangerous precedents for education in California. He struck a deal with the California Teacher's Association (CTA) to suspend constitutionally guaranteed K--12 school funding. And he proposed suspending the promise, for the first time in forty years, that every eligible California high school graduate would have a place at the University of California or a California State University. This from the governor who pledged to "work to expand the dream of college."

But with his defiantly immoderate State of the State speech in early January, when he proposed to drastically cut back education and social services in lieu of taxing the rich, Schwarzenegger blindsided liberal Californians with his nakedly Republican agenda.

Not in this lifetime, buddy.
Posted by SteveAudio at 9:26 PM