Ollie North: ...and people call me traitor to my face 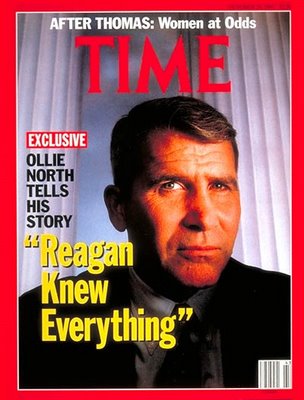 Why won't these bastards die, or at least, just go away? (From Greg at Alternet)

The electoral wave that battered Republicans last week rolled well beyond Ohio and Arizona, traveling as far south as Nicaragua, where voters rejected intense U.S. pressure and elected Daniel Ortega president. This was Ortega's third attempt to regain the office since stepping down in 1990, after a decade in power as the head of the revolutionary Sandinista government. And even as George W. Bush was stumping for his candidates in the heartland, Oliver North was traveling down to Managua to urge Nicaraguans to vote for anyone but Ortega.

The ex-Marine colonel told Nicaraguans that they had "suffered enough from the influence of outsiders" -- a remark meant to criticize Hugo Chávez's support for Ortega but that some, considering North's role in running the covert operation that illegally funded the anti-Sandinista Contras in the 1980s, must have mistaken for a confession. In addition to North, Bush's Ambassador to Nicaragua, Paul Trivelli, threatened that the United States could cut off aid, while congressional Republicans warned that they would pass legislation prohibiting Nicaraguans living in the United States from sending remittances home if Nicaraguans voted the wrong way.

Over the last couple of weeks, with polls predicting that an Ortega win seemed likely, conservative blogs, think tanks, and policy intellectuals whipped themselves up into a near-frenzy at the thought of a Sandinista comeback. The National Review breathlessly warned that a triumphant Ortega would bring the threat of nuclear or biological terrorism to "within walking distance of our undefended border." Over at the Washington Post, the American Enterprise Institute's Roger Noriega predicted that an Ortega victory would push Nicaragua "toward the abyss." 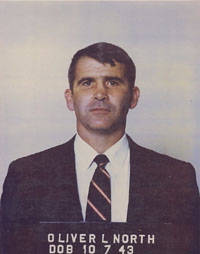 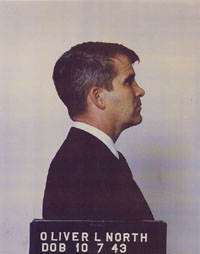 North became famous due to his participation in the Iran-Contra Affair, in which he was the chief coordinator of the sale of weapons via intermediaries to Iran, with the profits being channeled to the Contras in Nicaragua. He was responsible for the establishment of a covert network used for the purposes of aiding the Contras.

According to the National Security Archive, in an August 23, 1986 email to John Poindexter, Oliver North described a meeting with a representative of Panamanian President Manuel Noriega: "You will recall that over the years Manuel Noriega in Panama and I have developed a fairly good relationship", North writes before explaining Noriega's proposal. If U.S. officials can "help clean up his image" and lift the ban on arms sales to the Panamanian Defense Force, Noriega will "'take care of' the Sandinista leadership for us." North tells Poindexter that Noriega can assist with sabotage against the Sandinistas, and suggests paying Noriega a million dollars – from "Project Democracy" funds raised from the sale of U.S. arms to Iran – for the Panamanian leader's help in destroying Nicaraguan economic installations (see [1]).

In November 1986, North was fired by President Reagan, and in July 1987 he was summoned to testify before televised hearings of a joint Congressional committee formed to investigate Iran-Contra. During the hearings, he admitted that he had lied to Congress, for which he was later charged among other things. He defended his actions by stating that he believed in the goal of aiding the Contras, whom he saw as freedom fighters, and said that he viewed the Iran-Contra scheme as a "neat idea" (see [2]).

He should be in a Federal Prison. Instead, he's acting as an ex-officio ambassador.

With the current administration, nothing defines success like failure.

Read this article for more horrors from this idiot:

Washington D.C., 26 February 2004 - Diaries, e-mail, and memos of Iran-contra figure Oliver North, posted today on the Web by the National Security Archive, directly contradict his criticisms yesterday of Sen. John Kerry's 1988 Senate Foreign Relations subcommittee report on the ways that covert support for the Nicaraguan contras in the 1980s undermined the U.S. war on drugs.

Mr. North claimed to talk show hosts Hannity & Colmes that the Kerry report was "wrong," that Sen. Kerry "makes this stuff up and then he can't justify it," and that "The fact is nobody in the government of the United States, going all the way back to the earliest days of this under Jimmy Carter, ever had anything to do with running drugs to support the Nicaraguan resistance. Nobody in the government of the United States. I will stand on that to my grave."

The Kerry subcommittee did not report that U.S. government officials ran drugs, but rather, that Mr. North, then on the National Security Council staff at the White House, and other senior officials created a privatized contra network that attracted drug traffickers looking for cover for their operations, then turned a blind eye to repeated reports of drug smuggling related to the contras, and actively worked with known drug smugglers such as Panamanian dictator Manuel Noriega to assist the contras. The report cited former Drug Enforcement Administration head John Lawn testifying that Mr. North himself had prematurely leaked a DEA undercover operation, jeopardizing agents' lives, for political advantage in an upcoming Congressional vote on aid to the contras (p.121).