He's a loser, and he's not what he appears to be 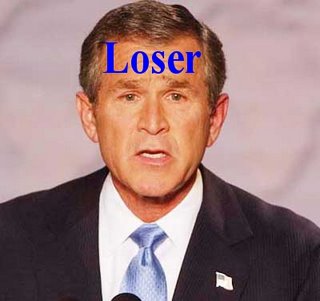 The weekend after the statue of Saddam Hussein fell, Kenneth Adelman and a couple of other promoters of the Iraq war gathered at Vice President Cheney's residence to celebrate. The invasion had been the "cakewalk" Adelman predicted. Cheney and his guests raised their glasses, toasting President Bush and victory. "It was a euphoric moment," Adelman recalled.

Forty-three months later, the cakewalk looks more like a death march, and Adelman has broken with the Bush team. He had an angry falling-out with Defense Secretary Donald H. Rumsfeld this fall. He and Cheney are no longer on speaking terms. And he believes that "the president is ultimately responsible" for what Adelman now calls "the debacle that was Iraq."

Sadly, it doesn't make me happy to see him fail. Because his failure has meant the deaths of so many Americans, in a war of no real necessity.

(Hat tip Sailor for the title suggestion!)
Posted by SteveAudio at 2:28 AM