And we'll drink and dance with one hand free, And have the world so easily 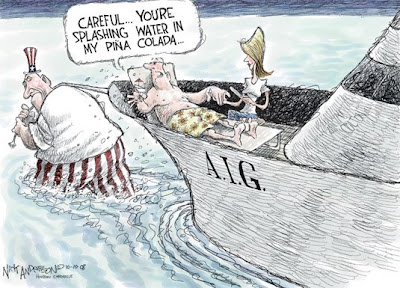 I don't suppose I have to spend a whole lot of time going over details of the whole AIG bailout and bonus brouhaha. It's pretty much everywhere at the moment.

The bonuses were kind of the icing on the cake to all the news from the past several months of the very companies crying "Help!" with their palms outstretched to the taxpayers turning around and being caught continuing their pampered lifestyles with spa vacations, superbowl parties and so on. They are like the trophy wife in a divorce wanting $100,000 a month in alimony to continue "the lifestyle I've become accustomed to". Like the sports star who will turn his nose up at a $15 million a year contract to hold out for $25 million a year with the reasoning "I have to feed my family", to which the average person wonders "What the hell do you feed them... bowls of diamonds??!!"
They are in a different world than the rest of us and can't understand (or, at least, don't care) that their greed and massive excess is disgusting to those "beneath" them in the economic scale. But the part that galls people the most is that it's now being practiced on the taxpayers dime. Taxes paid by people not worried about having to buy one less Rolls Royce or vacation home, but instead worried about staying in their one home and having money to put food in the refrigerator.
I did get a chuckle out of this:

Edward M. Liddy, the government-appointed chairman of A.I.G., said at least some bonuses were needed to keep the most skilled executives.
“We cannot attract and retain the best and the brightest talent to lead and staff the A.I.G. businesses."

And that's the biggest outrage: Having to hand out big bonuses to the very same people - contracted or not - who put their company, and the globe, into the mess that necessitated the bailout in the first place. "The best and the brightest". Steering the ship into the rocks and then making Gilligan an admiral. Yeah. It all makes sense to me.
If they are the best and the brightest, then God help us all. Hannibal Lecter was considered extremely bright, but I certainly wouldn't turn my back on him.

Addendum by The Sailor: Just when you thought the AIG scandals couldn't get any worse, we the people,owners of 80% of AIG, are suing ourselves for tax refunds:

While the American International Group comes under fire from Congress over executive bonuses, it is quietly fighting the federal government for the return of $306 million in tax payments, some related to deals that were conducted through offshore tax havens.
[...]
The lawsuit, filed on Feb. 27 in Federal District Court in Manhattan, details, among other things, certain tax-related dealings of the financial products unit, the once high-flying division that has been singled out for its role in A.I.G.’s financial crisis last fall. Other deals involved A.I.G. offshore entities whose function centers on executive compensation and include C. V. Starr & Company, a closely held concern controlled by Maurice R. Greenberg, A.I.G.’s former chairman, and the Starr International Company, a privately held enterprise incorporated in Panama, and commonly known as SICO.

Can you freakin' believe the sheer gall of these folks!?
Posted by Dancin' Dave at 8:51 AM