No disguise for that double vision 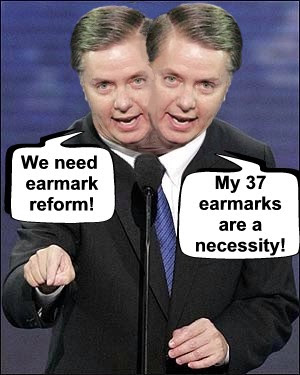 Moments after declaring that the country needs earmark reform, Sen. Lindsey Graham offered an arduous defense of his own, well, earmarking.

Appearing on NBC's Meet the Press, the South Carolina Republican was asked about his good friend John McCain's pork-focused critique of the omnibus spending bill that was held up in the Senate on Friday."We do need earmark reform," said Graham. "I wish [the president] would veto the bill, we'd get back together and come up with the earmark reform process."

Seconds later, however, Graham was reminded that he himself had inserted 37 earmarks in the legislation, including $950,000 for "a convention center in Myrtle Beach, South Carolina."

After defending the transparency and necessity of such an expenditure, Graham finally finished the 180, saying of the Myrtle Beach funding: "I voted to take all earmarks out, but I will come back in the new process and put that back in."

In other words: earmarking is terrible, but I should have the ability to earmark.

To be fair, Graham -- like every other member of Congress who inserted pork into the omnibus -- had to do it publicly. Moreover, the number of earmarks has dropped significantly since Congress passed legislative changes to the process after Democrats regained control.

Really not much to add to that. It just gave me an excuse to make up a silly graphic portraying a two-faced politician. Hardly a unique species, but funny to look at none-the-less.
Posted by Dancin' Dave at 2:26 PM