The things you say... you're unbelievable 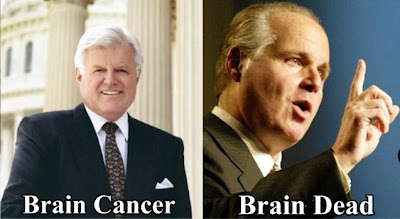 I'm not sure why I'm even bothering to mention this latest Limbaugh gutterism, but:

"Before it's all over, it'll be called the Ted Kennedy Memorial Health Care bill," Limbaugh said.
Brian Wolff, executive director of the Democratic Congressional Campaign Committee, called the remark outrageous and reprehensible.

Nice. But why should anyone even be surprised anymore by bad taste coming from the new GOP leader? Dittoheads pretend he is the voice of conservatism (and I guess he is for the far right wingnuts), but the truth is he is less a commentator than a high paid radio shock jock. And like all shock jocks, it's all about ratings and publicity. And Rush is reveling in the limelight he gets by saying stupid and offensive things. Put a few strippers on his show and he's not far off from the level of Howard Stern.

Yeah, I suppose by even posting this I'm giving Rush just what he wants. But by the same token, they say the best way to reveal cockroaches is to flip on the kitchen light. I think apart from the handful of hardcore dittoheads who live in the same uncompassionate, self-centered world as he does, the rest of America who actually would like to see our country rebuild and prosper and not "fail" just so some fat loudmouth can chortle "See, I told you so!" from his multi-million dollar mansion far above his audience who wouldn't share that advantage, the majority of Americans want this country fixed - by whatever means works - so EVERYONE, and not just the small handful like Rush who won't be hurt by it getting worse, can again afford housing and pay for healthcare.

It's easy for someone making hundreds of millions of dollars to say "everyone should pay for their own healthcare", but when it's skyrocketed to the point the average family in this economy can hardly afford it, that's not a statement that is based anywhere near reality. If universal healthcare isn't the answer, then what would the Republicans offer as an alternative? Frankly, I'm open to any plans. Bush in his 8 years certainly didn't do squat to deal with the problem. Then again, Bush pretty much ran with the "status quo" as being the solution to everything, that the market would take care of everything on its own, which is the same all-purpose plan multi-millionaires like Rush believe in, as well. Well, Rush, that sure didn't work, now did it?

Any other bright ideas? I mean, apart from taking potshots at a man seriously ill with brain cancer?

I have just installed iStripper, and now I can watch the best virtual strippers on my desktop.