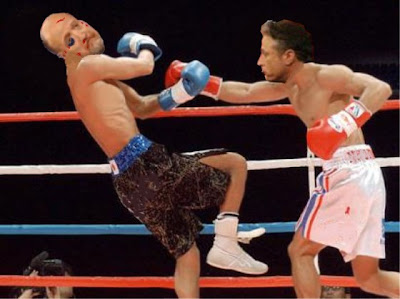 The other day we all got to see the Jon Stewart/Jim Cramer on-air "feud" reach its conclusion with an appearance by CNBC's "Mad Money" man on the Daily Show. But this wasn't for a debate on the issues. Cramer knew he had no ammo to fire back as Stewart certainly had the "goods" on Cramer via indisputable video clips of Jim basically bragging about how someone clever like him and others could manipulate the activity on the market while a clueless (at best) SEC stood by slack-jawed and silent.

Cramer's appearance, to me, seemed more like a naughty boy caught smoking behind the woodshed being marched in front of his parents to sheepishly face the music, attempting damage control with weak-at-best defenses, but mostly just sweating and wanting the moment to hurry up and pass. At the end of the show you could almost see the huge sigh of relief burst forth from him. He knew his dismissals of Jon Stewart being a "comedian" during the past week wasn't getting him any further out of the exposed mess he was in, so he had little choice but to go on the Daily Show and take it on the chin and hope that finally made it all go away.

I don't see how after all that has gone down he'll be able to go back and make the stock situation "entertaining" again. People don't tend to laugh as much at silly sound effects after they've lost half or more of their retirement nest egg.
I won't go into everything covered by Jon Stewart, but you can see the entire episode here.
Here are a few of the past quotes on video that Cramer could hardly defend:

"A lot of times when I was short at my hedge fund, and I was positioned short, meaning I needed it down, I would create a level of activity before hand that could drive the futures," Cramer said. "It doesn't take much money. Or, if I were long and I would want to make things a little bit rosy, I would go in and take a bunch of stocks and make sure they are higher–maybe commit $5 million in capital and I could affect it. Now, you need maybe $10 million in capital to knock the stuff down. But it's a fun game. And it's a lucrative game."

"What's important when you are in that hedge fund mode is to not doing anything that is remotely truthful, because the truth is so against your view–it is important to create a new truth to develop a fiction," Cramer advises. "You can't take any chances."

"You can't foment," Cramer says. "That's a violation. You can't create yourself an impression that a stock is down. But you do it anyway because the SEC doesn't understand it. That's the only sense that I would say that it is illegal. But a hedge fund that is not up a lot really has to do a lot to save itself. This is blatantly illegal. But when you have six days and your company may be in doubt because you are down, I think it is really important to foment. If I were one of these guys, foment an impression that Research In Motion isn't any good."

"Get people talking about it as if something is wrong with RIM," Cramer advises. "Then you would call the (Wall Street) Journal and talk the bozo reporter on Research in Motion and you would feed that Palm has got a killer it is going to give. These are the things that you must do on a day like today. And if you are not doing it, maybe you shouldn't be in the game."

"I understand that you want to make finance entertaining, but it's not a fucking

It's quite clear Stewart's point was that nobody could count on long term investments when half the market was glorified gambling on financial instruments nobody quite understood, propped up by a class of intellectually dishonest hacks and, yes, the media has been an accomplice to promoting this house of cards. Jim Cramer admitted as much - that Stewart was right in his criticism.

And Jon Stewart was right when he said this is not about Jim Cramer. But hopefully this is just another step in the march to expose the serious loopholes in the whole system that allowed a group of greedy sharks to profit at the expense of everyone else, and lead to the changes needed to overhaul this system with the necessary oversight, regulations and checks and balances to make sure that corrupt get-rich-quick scum can't trash the economy again for their own profit, while those who SHOULD be policing it are either out to lunch or in on the game.
Posted by Dancin' Dave at 10:34 AM