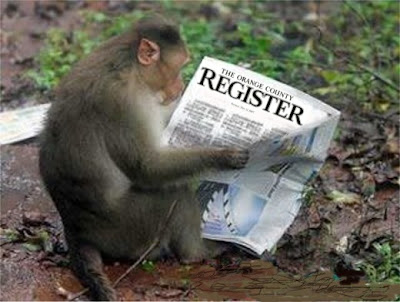 The swollen bag of pus that is Orange Co., CA's newspaper of birdcage bottoms, the OC Register, manages to step on their collective dick once again:

But not to fear, because, to start with, President Obama can seemingly purr his way out of anything, as when asked at his press conference the other day why the public should acquiesce in "sweeping authority for the government to take over companies."

My, oh my, did he sound reasonable. You see, the absence of this power makes it difficult to do what needs to be done – fixing AIG, for instance. In the case of federally insured banks, he said, the government can pounce, but is held back by law from grabbing other kinds of private companies. What's needed is a system that allows orderly procedures to tidy up everything.

Uh, huh. So what if the issue was doing away with warrant-less search and seizure of anyone the police wanted to investigate? The absence of that power makes it far more difficult for officers to get the goods on criminals, and there is consequently more crime than there would otherwise be, it could be argued. We allow these searches when the courts say OK. What's now required is a system permitting them whenever the police want so that we can have a more orderly society.

It's always possible to make certain kinds of pragmatic-sounding arguments for the demolition of liberty. I once heard then-Prime Minister Lee Kuan Yew of Singapore give a seemingly rational defense of curtailing press freedoms. Otherwise, he said, you could have riots. You could have chaos. What's more important, he wanted to know – having yakety-yak criticism, or saving life and limb?

Patently idiotic. Even more disturbing is that this paper purports to be not a neocon rag but a Libertarian organ. Thus, the argument that warrant-less search and seizure is too awful to contemplate rings hollow, knowing that the late GWBush administration orchestrated and executed just such searches and seizures, including holding "enemy combatants" with no charges filed, no access to the legal system, and no recourse. But that was OK, because it was in the name of the "War on Terra".

And the Prime Minister of Singapore wanted to curtail freedom of the press? Of course, that would never happen here. Unless you count Ari Fleischer back on 9/26/01:

And that's why—there was an earlier question about has the President said anything to people in his own party—they're reminders to all Americans that they need to watch what they say, watch what they do. This is not a time for remarks like that; there never is.

Yeah, I though so.

The Register did complain about Bush & Co. once in a while, but by and large, they were silent on many of his tyrannical overreaches. Thus the Libertarian tendencies fall victim to Wingnuttery. Like certain Supreme Court justices, the results are pre-ordained, and the methodology is all that varies.

Posted by SteveAudio at 1:08 AM